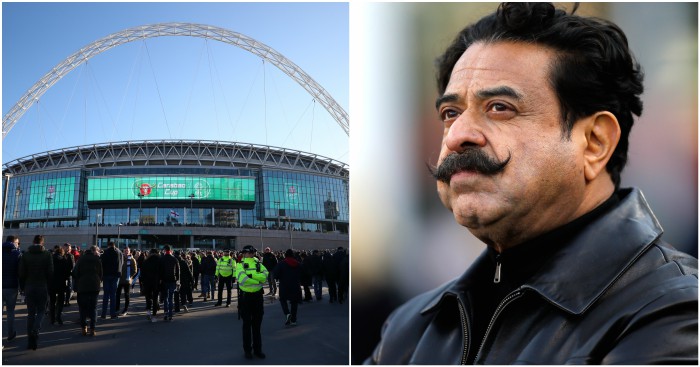 Fulham owner Shahid Khan has withdrawn his offer to buy Wembley, the Football Association has announced.

“Earlier this year, the FA received an unsolicited official offer from Shahid Khan to buy Wembley Stadium. It was a very credible offer and was given very serious consideration.

“Shahid Khan has informed us today that he will be withdrawing his offer to buy the stadium – and we fully respect his decision.

“Mr Khan believed that his offer to buy Wembley Stadium would release funds to help improve community football facilities in England and that it would be well received by all football stakeholders.

“At a recent meeting with Mr Khan he expressed to us that, without stronger support from within the game, his offer is being seen as more divisive than it was anticipated to be and has decided to withdraw his proposal.

“Wembley Stadium is an iconic venue that is revered around world and it will continue to thrive under the ownership and direction of The FA.

“There has been much deliberation on both sides of this debate and it has undoubtedly raised awareness of the issue that community football facilities in England need significant investment.

“We would like to thank the football stakeholders, Government, FA Board and Council members for their collaborative approach throughout this process. We will continue to work together to identify new and innovative ways of investing in community football facilities in the future.”

Nani, Manchester United, and the unfair portrayal of a ‘frustrating’ talent (Planet Football)