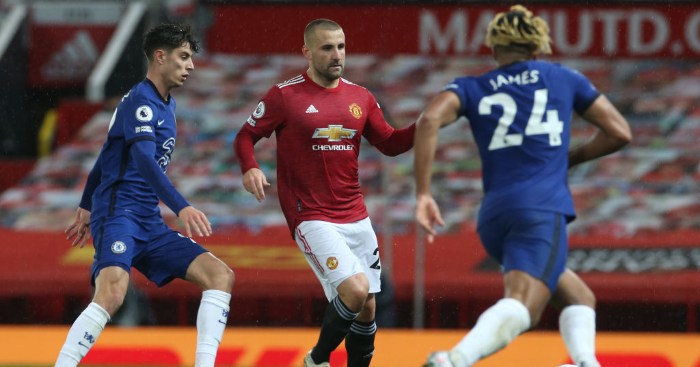 We take a tactical look ahead to Wednesday’s Fulham v Man Utd clash in which Aaron Wan-Bissaka and Luke Shaw have important roles to play.

Tactical pattern
Scott Parker is growing in stature all the time and after battling performances against Chelsea and Tottenham, he stands a good chance of taking something from Manchester United. The visitors will dominate the ball, although Fulham are surprisingly aggressive, pressing on any heavy touches and holding a confrontational mid-block from the start.

However, when down to 10 men they couldn’t keep this energy up against Chelsea and ultimately dropped deep, inviting pressure and letting Frank Lampard’s creative players get on the ball. That should be the pattern at Craven Cottage on Wednesday, although United probably lack the creativity to unlock a rigid and disciplined 5-4-1 blockade.

Key battle zone
Luke Shaw and Aaron Wan-Bissaka are the most important players on the pitch for Man Utd, who will often find themselves roughed up by Fulham’s approach and with little space in which to operate in the final third. But as Fulham drop deeper there is a chance for United to gain a crucial advantage, as Chelsea did last weekend.

The 5-4-1 is most vulnerable out wide as Ademola Lookman and Bobby De Cordova-Reid flit between different roles (more on that below) and occasionally fail to get tight enough to an over-lapping full-back. The attacking side of Wan-Bissaka’s game has come on leaps and bounds this season while Luke Shaw is in the form of his life; if United can get these two on the ball, they may carve out the space to break down Parker’s solid defence.

Keep an eye on… Cordova-Reid’s movement on the break
In the Spurs game, Fulham moved seamlessly between a 5-3-2 and a 3-4-3 thanks to Cordova-Reid slipping between a central midfield and right forward role in different phases of the game. Against Chelsea, a flat 5-4-1 off the ball became a 3-4-3 when Cordova-Reid and Lookman cut inside to join Ivan Cavaleiro in a narrow front three. They interacted neatly on the break, almost carving Chelsea open on a number of occasions before Fulham went down to 10 men.

In both games Cordova-Reid’s movement was too intelligent for the opposition to track successfully; he has become the most important player when Fulham break. United generally don’t find it difficult to defend narrow counter-attacks, however, which may mean Parker funnels his attacks behind Shaw and Wan-Bissaka. Either way, how Fulham’s forwards transition from a defensive to an attacking phase will define the match.

One to watch… Bruno Fernandes
Fulham’s early aggression should be successful against a Manchester United side who appear to be slowing down (they have scored just four goals in their last four league games). Then again, as Fulham press high from goal kicks and look to win the majority of the second balls by rushing up the pitch to meet the visitors – something they did very well in the first half against Chelsea – they may be left open to United’s pace.

Bruno Fernandes is superb at sussing out a game and deciding where to position himself to receive passes between the lines. Should he be at his best, then Fernandes can give the United midfielders an option that bypasses Fulham’s pressing, in turn creating space for Anthony Martial and Marcus Rashford to terrorise the back three. But Fernandes was particularly poor against Liverpool – making it more likely that Fulham will succeed.