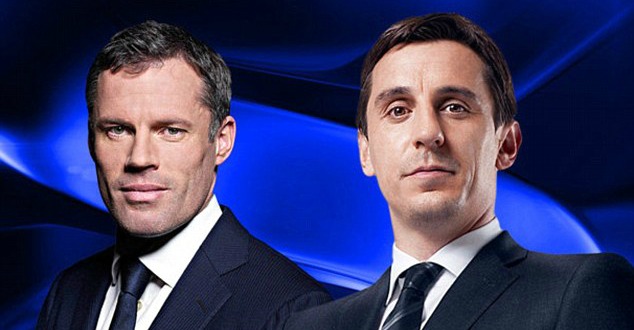 Gary Neville and Jamie Carragher had their say on Project Big Picture on Monday Night Football.

The controversial plans, driven predominantly by Liverpool and Manchester United, would have seen a radical shake-up of English football.

The proposal – which was quashed “unanimously” by the Premier League clubs – included an 18-team Premier League, an EFL bailout and – most significantly – increased power to the top six. The full list of plans can be found here.

READ MORE: Prick of the Week No. 5: The Big Six and Cartoon Supervillainy

The Sky Sports pundits understand the furore that followed the leaked document, but believe it was largely positive, both in its content and the conversations it has led to.

“Number Two, what that means to me is that the Premier League do accept that the EFL do need a £250 million bailout, but actually, they’re saying that if you don’t accept Big Picture, you’re not going to get your £250 million. But at least there is an acceptance.

“Dropping parachute payments, I’m happy with. Eighteen clubs, I haven’t got that big a problem with. The fairer distribution of the wealth in the game, by the money from the two clubs and the parachute payments going to the EFL, I’m massively supportive of because, along with the salary cap, I think it makes most EFL clubs sustainable. There’s no need to drop the Community Shield – fit it in on a Wednesday, fit it in on a Thursday like they do with the Super Cup. It raises money for charity, for goodness sake. Don’t get rid of it, it’s silly. Just compromise on that point.

“The Carabao Cup, yeah I think it could be reshaped. Why couldn’t it be something that’s part in preseason, part in the first few weeks of the season? To me it’s not a competition that needs to be lost because ultimately I think you can do different things with it.

“For me, Project Big Picture, when it came forward, having been part of the group that I was part of, which was asking for an independent regulator, I welcomed Project Big Picture coming forward. Not because I supported it, but because there was an acceptance from clubs and from the EFL and the FA – we’ll come onto the FA in a minute, Greg Clarke who’s been part of this all the way through and is now trying to distance himself from it, the worst of the lot, he’s neither pleasing one side or the other.

“If the FA chairman, the EFL chairman, and six clubs in the Premier League have come together to create what would be a new proposition for English football, there is at least an acceptance that the current situation is not acceptable. There isn’t anybody in English football, whether it be the fans, the EFL, non-league clubs, Premier League clubs, the FA – no-one is happy with the current predicament. What Big Picture did was put onto the table the fact that there is a debate to be had about what English football does in the future.

“To me, it wasn’t acceptable, but at least it’s being discussed. It was on the table, there’s an acceptance that there needs to be a fairer distribution of wealth across the game. Fans need a better deal – part of Project Big Picture was that the away fans’ price would go from £30 to £20 – who’s not in favour of that? Everybody’s in favour of that. There’s parts of it that actually you could vote for.

“My view of what happened, quite simply, is that Project Big Picture came out on the Sunday. The 14 Premier League clubs had obviously been blindsided by their own members, so that’s a problem that they’ve got to take internally. We all know what happens – some of those 14 clubs get onto their mates in the media, and you either have to come out with a press report within 24 hours because of the immediacy of it saying ‘I hate it’ or ‘I love it’.

“It was basically lambasted across the board for being a power grab by the big six, because that’s the point at the top that none of us can accept. What should have happened is that, yes, maybe the six clubs and the EFL should have introduced it in a different way. It shouldn’t have been leaked, it should have been presented properly and done behind the scenes.

“What I believe that reaction to Project Big Picture should have been was ‘Woah, let’s hang on a minute here. There’s a proposal come forward, we don’t like some of it – in fact, we can’t even begin to think to vote for it – but actually, there are bits in there we really like, and actually we’re willing to debate around a major issue, which is: we’ve got to distribute the wealth fairer across grassroots, non-league, the EFL, and fans have got to get a better deal’. Simple as that, it was on the table to debate.

“What the Premier League then did a few days later, when you say they rejected it, is that they unanimously rejected it, but then, I think the most important point out of that statement is that they agreed to work together to create a new strategic review of English football. That’s all I really wanted to hear because it needs reviewing quickly.”

“They’re there every year, and there are teams coming up and down. One of the reasons they get their £100 million is that they’re the big clubs and they drive that. I agree with everything that Gary has said really.

“One thing I don’t like about Liverpool and Manchester United – I’m not sure if I’d feel differently if it was David Moore involved at Liverpool, or if it was David Gill or Martin Edwards. There’s something about the fact that they’re both owned by American ownership who want to make a few quid. We know that when they come in, we know that they will try and sell at some stage. They’re trying to change English football and give those clubs more power, not necessarily because they want more power so that Liverpool or United are more successful in 30 years time, it’s probably to get more money when they sell.

“But what I wanted to say, they’ve taken a lot of criticism, the top clubs, Liverpool and Man United. As Gary said, a lot of the stuff was good and a lot of it wasn’t, so rightly so, took a lot of criticism. What I didn’t like was the hypocrisy of it, of all these other clubs in the Premier League then saying, ‘The top six are looking after themselves doing this’. Are we forgetting Project Restart? The bottom six clubs, the bottom ten, didn’t want the league to go on. Karen Brady was on about null and void because it suited them.

“This idea that people in football are going to look after each, that we’re this football family, is nonsense. It’s never been that way and it never will. Everyone will do what’s best for them. Liverpool and Manchester United with do what’s best for them. If the EFL want money we’ll give you money, but we want loads back in return. As I said before didn’t want to carry on – let’s finish the season, no relegation.

“Everyone in this situation will always look after themselves. The thing that you [Gary] are involved in, the saving the game type of thing, nobody would every disagree with that, but I just don’t see how it could work, or how an independent regulator could make decisions for other people and they’d accept that.”