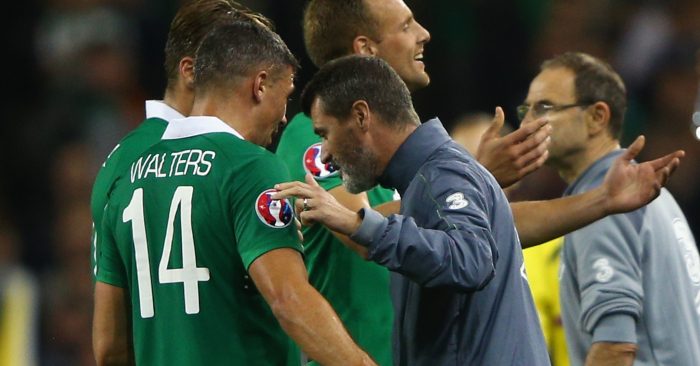 The full transcript of Stephen Ward’s explanation as to the numerous fallouts in the Republic of Ireland camp is the most riveting read since the deleted bits of Daniel Storey’s Portrait of an Icon.

In a WhatsApp message that has since been leaked on social media, Burnley defender Ward is heard telling his friends about assistant manager Roy Keane’s bust-up with teammates Harry Arter and Jon Walters.

The alleged arguments occurred in May and June when Ireland faced France and the USA in friendlies, with Ward not part of the squad.

But the 33-year-old has relayed the version of events that he was told, with manager Martin O’Neill forced to deny the claims in a press conference on Tuesday.

You’re not here for all that, of course. You’re here for Roy Keane calling Harry Arter a “f**king p***k”, and Jon Walters branding Keane a “sh*thouse”. So here is the full transcript of Ward’s message:

‘So basically lads, Roy was getting on to the lads for not training three days in a row. Johnny’s got a bad knee so he can’t train all the time.

‘They were at the training ground and him and Harry were just sitting on the bench, just relaxing and icing themselves and stuff. Roy walked over and was like, “Why aren’t you lads training?” and he blatantly knew why they weren’t training because the manager would have told him and they were like, “We can’t do three days in a row”.

“What are you guys? Professional footballers? That’s a shambles that is”. The both didn’t say anything and Roy walked off and came back over again, “So when are you going to train, I’m sick of people pulling out with injuries, what the f**k is wrong with ya?” and the lads were like, “Listen, we’ve got problems, we do it at our clubs, we can’t do it”. Roy said something under his breath about Johnny and walked off.

”Johnny lost his head, jumped off the bench and walked after him, grabbed his arm and said, “What’s the story Roy? If you’ve got a problem say it to my face, don’t f**king walk off” and he was like, “I do have a problem, you’re not training, you’re getting soft, it’s no wonder Dyche doesn’t play ya, you’re f**king always looking for an argument like you are now” and he was like, “No Roy, you are the one trying to start an argument”, and apparently they were squaring off to each other and having it off and had to be pulled off each other. All the lads were grabbing Johnny away from him… Johnny was going to kill him.

‘Roy brought up something about when they were at Ipswich together, they had like a falling out as well. “You’re threatening me again Jon, like you did at Ipswich”, and Johnny was like, “Yeah, are you going to be a sh*thouse again and send me my fine in the post rather than say it to my face?”.

‘It blew over for a few days and then they flew out to France and Johnny apparently just text Roy was like, “Listen Roy, I’m in room whatever, if you wanna come up, you’ve obviously got something on your mind that p*sses you off about me because it’s causing tension in the squad, let’s talk it out”.

‘Apparently Roy just wrote back, “Nah, I’m just here to help players. People like you… stay out of each other’s way. You don’t need to reply to this message”, and that was that.

‘They got back from France and Harry felt his quad in training again. So he wasn’t training. Apparently he was getting treatment in the treatment room and Roy walked in and was like, “When are you going to train you f**king prick?” and Harry was like, “What?”, and he was like, “Any chance of you training?”. He explained the situation again and Roy was going off going, “You’re a f**king p***k, you’re a c***, you don’t even care, you don’t wanna train”, and Harry was just going, “Roy, I’m not speaking to you like this. I’m not listening to you. You’re not the manager. You can’t say anything to me”.

‘Apparently Roy was going mad getting worse and worse and Harry got up off the treatment bed and was walking back to his room. As he was walking back Roy was shouting down the corridor, “You’re a f**king p***k, you’re a c*** you’ve been all your life” and that was really it lads.

‘It didn’t come to blows but basically just Roy losing his head.’