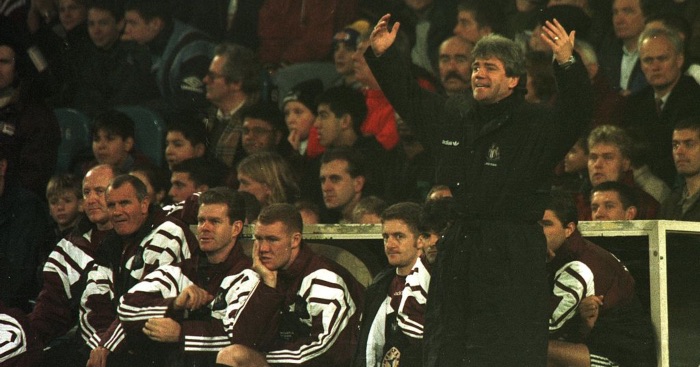 Those teams that have neutrals on the edge of their seats, and fans watching from behind theirs. Here are six of the most entertaining but fragile Premier League sides…

Chelsea 2019/20
A giddy, green Chelsea qualified for the last 16 of the Champions League on Tuesday night, as they flew by the seat of their pants through one of the most entertaining groups in this season’s competition. The comeback from 4-1 down to draw 4-4 with Ajax at Stamford Bridge earlier in the group stage was wonderful to watch, as Chelsea simply gave up defending in search of an unlikely result against last year’s semi-finalists.

But that was insanity out of necessity – more bizarre is their insistence on this style of play no matter the situation. On Tuesday – leading 2-0 against a purposefully depleted Lille side after 70 minutes – Chelsea could have been knocked out of the Champions League through their insatiable desire to see the ball ripple the back of the opposition net. It makes for brilliant viewing, but it is utterly shambolic.

Frank Lampard could be seen on the touchline throwing his hands in the air as Chelsea missed chance after chance in injury time, as the players ran around like sugar-fuelled kids evading the child catcher. But Lampard’s frustration was not at a lack of game management – which he was at pains to point out at full-time is the “biggest improvement” his side need to make – but at their inability to score a goal they didn’t need to qualify. The first lesson in game management Frank? Keep the ball in the f***ing corner.

Newcastle 1995/96
Painful though the memory of Newcastle’s “I’d love it if we beat them” close-call season must be for Toon fans, they must now be looking back on the days of Tino Asprilla, Les Ferdinand, David Ginola and Phillippe Albert with heady nostalgia.

Undoubtedly the best Premier League Years for a rainy afternoon, partly because of Kevin Keegan’s famous rant, but mainly to see the joy with which Newcastle played their football and the pleasure of the shirtless nutters that crowded the Gallowgate.

Fans continue to boycott home games in protestation over Mike Ashley’s ownership and his appointment of Steve Bruce, but they should take solace in the reminder of those free-flowing, devil-may-care days to which new signing Allan Saint-Maximin is paying tribute at St James’ Park.

He’s a bit of Ginola, a lot of Asprilla, not enough Ferdinand, and a hell of a lot of fun.

Liverpool 2013/14
Brendan Rodgers’ Liverpool scored 101 goals as they missed out on the title to Manchester City in 2014. Luis Suarez and Daniel Sturridge scored over half of those goals in one of the great Premier League strike partnerships; they were brilliant.

The Reds scored three or more goals in 21 of their 38 Premier League games, but also conceded three to Everton, Stoke, Swansea, Cardiff and most memorably against Crystal Palace in their penultimate game of the season – the capitulation which all-but ended their title hopes.

Leicester’s form this term suggests Rodgers does know how to be solid at the back while carrying a potent attacking threat. That’s something he must have learnt since that whirlwind 2013/14 title charge, built on goals but which ended with a slip and a kick in the teeth.

Ivan Campo striding forward to bang one in from 30 yards, World Cup winner Youri Djorkaeff jinking past defenders and Jay-Jay Okocha smiling as he avoided tackles aimed at breaking his legs as he flicked balls over, round and through defenders. The two Kevins, Nolan and Davies – more typically Allardyce players – were top scorers for Bolton that season, but it was Big Sam’s ‘Allacticos’ that endeared that Trotters side to the football masses.

It’s 17 years to the day since Bolton signed Jay-Jay Okocha. You remember him.

They are one of the few examples of a low to mid-table Premier League side being joyous as well as functional, as they finished eighth in the table. In 2004/05 they did even better, finishing sixth, though by now Djorkaeff had left for Blackburn. Though Fernando Hierro as an ‘Allactico’ replacement wasn’t half-bad.

Throwback to this Goal by Jack Wilshere against Norwich, it’s the Greatest Team Worked Goal ever. One Touch WengerBall in full flow 🔥😍pic.twitter.com/Us2eFDJPh9

Not the turgid, directionless, stale Arsenal of today, or even the powerhouse Invincibles of the early Wenger era. These Gunners could produce those moments of pure magic one week and then get hammered 6-0 by Chelsea or 6-3 by Manchester City the next. We want that Arsenal back.

Manchester City 2008/09
This was the first year Man City really started to throw their financial weight around. They spent £120million on the likes of Jo, Shaun Wright-Phillips, Nigel De Jong, Vincent Kompany and of course Robinho – who famously thought he was joining Chelsea.

Throw in Brazilian free-kick master Elano and a peak Stephen Ireland and this was a very entertaining side. They finished tenth – not great considering the money spent – but were only outscored by the top four. And although Robinho perhaps didn’t become the player City had hoped, he produced some sparkling football in a season that saw Kompany drift from his central midfield role into the back four – which worked out pretty well in the end…