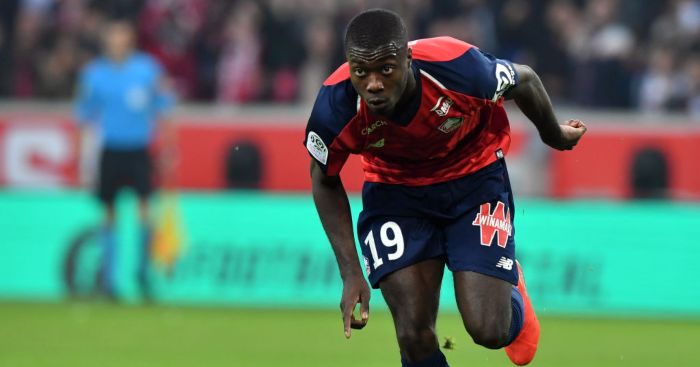 Liverpool have dismissed claims that there have been “concrete discussions” over a potential transfer for Lille’s Nicolas Pepe, according to reports.

In an interview with Get French Football News, RMC Sport‘s Mohamed Bouhafsi claimed yesterday that the Reds are in talks over a deal worth €80million.

“This is an €80m situation. So it is a situation that needs time and calm,” Bouhafsi said.

“I know that Jurgen Klopp adores Nicolas Pepe’s profile, he brings a lot of speed and he is made to play in England, with quick transitions and an exceptional ability to counter-attack,” he said.

“Discussions have been had with Liverpool, who have a very profound interest. The other thing that I know is that Nicolas Pepe is at AFCON and wants a couple of days to make his decision.

“It needs time, because Nicolas Pepe is asking for time, and we have to respect the player’s wishes, who wants to concentrate on his national team.

“And don’t be surprised if other clubs dive into the race in the coming days, at Lille, I’m told that they are anticipating other Premier League clubs to get involved. It is not unthinkable.”

However, the Liverpool Echo say that the Reds are ‘furious’ over the speculation and have dismissed it as ‘pure lies’.

Sporting director Michael Edwards was in contact with Lille earlier in the month to say there was ‘zero interest’ from Liverpool to make a deal happen and that he was unsure where the reports were coming from.

Liverpool feel they are being ‘used’ to increase interest in the Ligue forward and they have made it clear they ‘will not be taking any interest’ in the player.