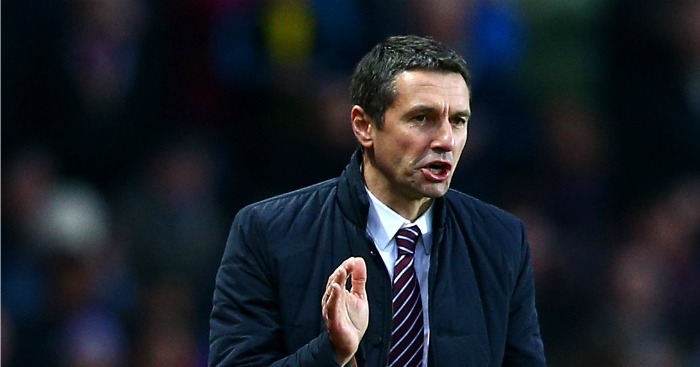 Joleon Lescott and Gabby Agbonlahor scored in Saturday’s 2-0 win over Norwich to give Villa just their third league win of the season.

They remain bottom of the Barclays Premier League and eight points from safety.

But in a season where Leicester top the division and defending champions Chelsea languish in mid-table Garde feels Villa can add to the unpredictable campaign and survive.

He said: “Why not? When you see Leicester now, it’s crazy and unbelievable, nobody could have seen that 12 months ago.

“We should be inspired by that. I have the feeling it’s very tough but the players I select every week believe it’s still possible.

“The road is still very long and difficult, until the end we will have a lot of suffering. Nobody will help us now, it will be within the dressing room.

“I believe in hard work, discipline, rigour. It’s not only in a week or two weeks you can pick up the fruits of that. If we keep this attitude maybe everyone will eat fruits at the end of the season.”

One year ago today Leicester sat bottom of the table on 17 points; only one more than Aston Villa have this season. pic.twitter.com/IOEabURjsi

Lescott, who opened the scoring just before the break, added: “Everyone has written us off and so we’ve got nothing to lose. If we go down everyone says: ‘Well, we knew that in January or February.'”

The Canaries have now lost their last six games in all competitions and have conceded 19 goals during their wretched run.

Declan Rudd rashly ran out of goal but failed to stop Agbonlahor making it 2-0 and boss Alex Neil insisted he cannot control their errors.

He said: “You don’t need a mastermind coach or tactician to say head the ball and don’t run out of your goal. It needs to come from the players.

“You watch Man City and do you think (Manuel) Pellegrini tells them where to play? Of course he doesn’t. What he does is he tells them to play upfront and a player gets the ball and skips past three players and puts it in the top corner. He just sits and claps his hands.

“If somebody needs a wake-up call now we have real problems.”