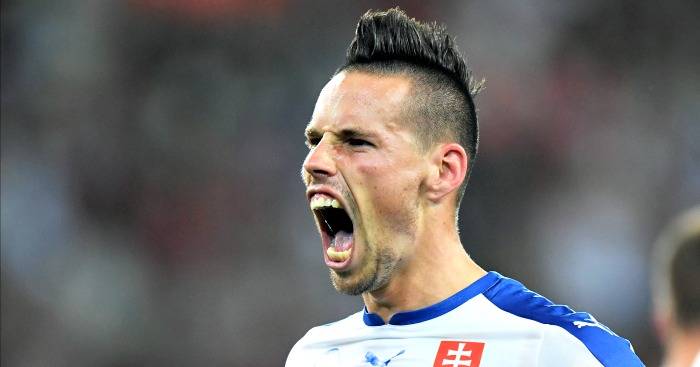 “I think Gareth is one of the best players in the world. I wouldn’t like to compare myself to him.”

Marek Hamsik’s comments fell on predictably deaf ears. Speaking ahead of Slovakia’s European Championship debut against Wales last week, the vice-captain was keen to downplay claims of a meeting between two diminutive nations being a case of ‘superstar versus superstar’.

In the red corner, the Real Madrid Galactico, the most-expensive footballer ever, the man who carried the collective hopes of a country making their first competitive tournament appearance in 58 years. In the blue corner, Napoli’s darling, a Serie A stalwart, the man who had already inspired his nation to a memorable maiden World Cup campaign six years ago.

Hamsik impressed in Bordeaux on Saturday, but it was Bale and Wales who emerged victorious. Attention soon turned to how England would deal with the forward’s considerable threat, with Roy Hodgson’s side in need of a positive result after a disappointing opening draw. Where the Three Lions failed to capitalise on the obvious deficiencies of a poor Russia side, Hamsik made a mockery of them in a famous Slovakia win on Wednesday.

Euro 2016 has been a tournament dominated by team performances rather than those of the individual. A well-drilled Croatia laid down the marker against Turkey; Hungary and Iceland overcame more talented sides with endeavour, energy and superior tactics; Italy provided the best example by nullifying a fractured Belgium.

But there has been room for independent excellence. Dimitri Payet inspired France past a battling Romania; Andres Iniesta was simply brilliant against the Czech Republic; Antonio Conte built Italy’s success around Leonardo Bonucci. In Lille, Hamsik was the difference in a game drastically short of true quality.

With no disrespect intended to Oleg Shatov, Russia’s attacking midfielder is not capable of the sort of pass which released Vladimir Weiss for Slovakia’s opener in the 32nd minute. And Michal Duris may have hurt himself even attempting Hamsik’s pièce de résistance 13 minutes later, as the 28-year-old cut inside and fired an unstoppable effort beyond Igor Akinfeev. With five shots (more than any other player), 52 passes (the most of any Slovakia player) and two moments of undeniable class, England will be forgiven for casting worried glances over at Group B’s other leading light.

The prospect of dealing with Bale on Thursday has been cause for a few sleepless nights for Gary Cahill and Chris Smalling; the scorer of seven of Wales’ 11 goals in qualifying is an obvious threat. Hamsik – with five of Slovakia’s 17 qualifying goals – might be a less obvious dangerman, but a potentially more potent one.

England’s defence, as limited as it is, has experience in challenging a fast, direct and skillful opponent. How often has Eric Dier, likely to be tasked as the sole defensive midfielder once again, faced an opponent with the guile of Hamsik? As impressive as his transition to the position has been, does the Tottenham star have the credentials to limit such a latent threat?

Bale is the comedian whose joke you already expect, but whose delivery makes it impossible not to fall for regardless. Hamsik is the comedian who leads you to anticipate three separate punchlines, then waits for the audience to react as they slowly realise he has already delivered it. The former is the supposed biggest threat to England’s hopes of qualification, but we all know they are just as likely to fall for the latter.