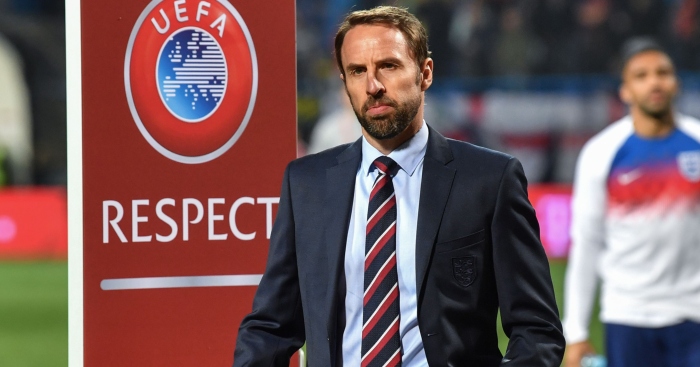 England manager Gareth Southgate has spoken out after his team’s exceptional 5-1 win in Montenegro was marred by racist chanting.

Raheem Sterling, after scoring England’s fifth, made a gesture with his ears towards the Montenegro fans, whilst there were monkey chants aimed at Danny Rose towards the end.

“I definitely heard abuse on Danny Rose when he got booked at the end of the game,” said Southgate, speaking to ITV.

“There’s no doubt in my mind that it happened, and we’ll make sure that that’s reported officially. It’s not acceptable.”

“I’m not sure yet,” he continued, when asked about Sterling’s celebration. “I had a quick chat with Danny because I heard what happened there, but I’ve not had a chance to speak with Raheem yet. Whatever’s happened, we will report. I don’t want to speculate yet, but I know what I heard.”

“We’ll definitely deal with it in the right way and we have to make sure we support our players.”

Reports of racism first emerged in the opening minutes of a match that saw initially cumbersome England punished in the 17th minute.

Hudson-Odoi’s measly challenge allowed Zarko Tomasevic to get his head on a hopeful diagonal pass and Keane failed to mop up the loose ball. Vesovic lapped up possession and bundled past the bumbling England centre-back to curl in.

The home crowd erupted in disbelief as much as joy, but the Three Lions reacted with character that belied their inexperience and their set-piece prowess brought a 30th-minute leveller – and from there it was plain sailing as Barkley, Harry Kane and Sterling added more.

Chelsea forward Callum Hudson-Odoi was also aware of the chants.

“I don’t think discrimination should be anywhere – we are equal,” he told BeIn Sports after the game.

“When you are hearing stuff like that from the fans, it is not right and it is unacceptable. Hopefully, UEFA deal with it properly. When me and Rosey went over there, they were saying, ‘ooh aa aa’ monkey stuff and we just have to keep our heads and keep a strong mentality.”

“Hopefully Rosey is OK too. We will discuss it and have a chat. He has a strong mentality and is a strong guy so hopefully everything will be good. Hopefully UEFA deal with it.”

“It is not right at all – I was enjoying the game too. We just have to take the win and go back home.”