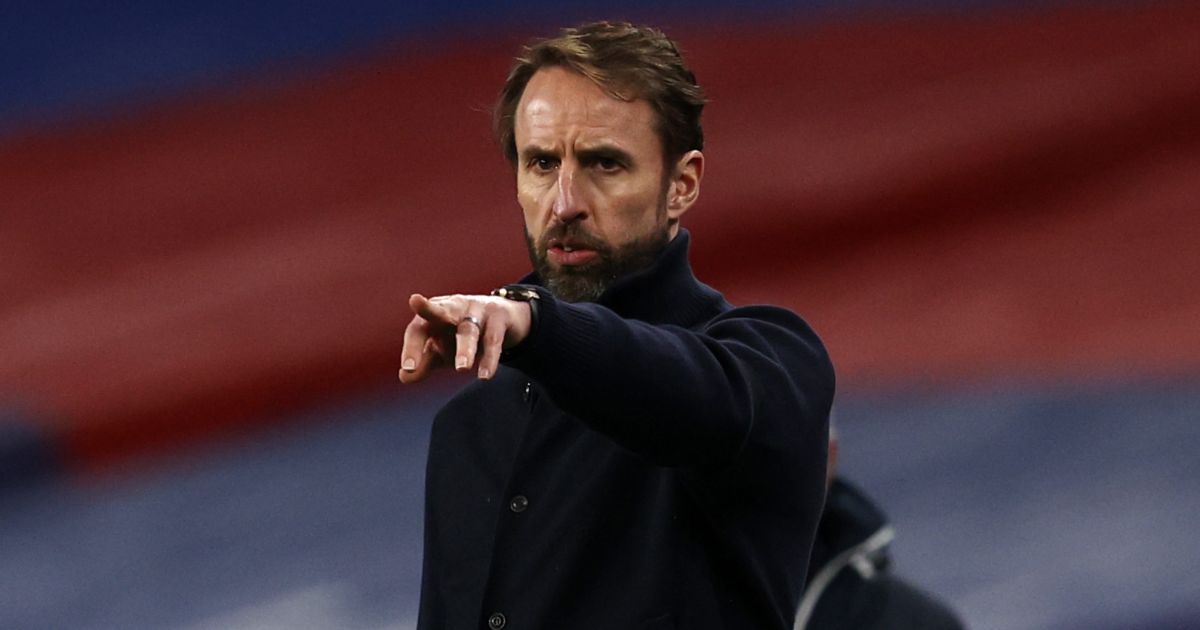 Keep your mails on England, Gareth Southgate and anything else coming to theeditor@football365.com…

Case for the defence
Another international break, another unwarranted silo of abuse for Gareth Southgate. His crime being that he isn’t wanting to cram as many attacking players into the England starting 11 as possible. His other crime being that he may possibly fail in the future, but hasn’t actually failed just yet.

My controversial hot take for this edition of the mailbox is this: It is sensible to set up defensively.

A quick scan of our potential second-round opponents in the Euros (which, assuming we win the group, will be France, Germany, or Portugal) shows teams with stacked, frightening front lines and fairly middling back lines. I know that this round of internationals won’t reflect eventual starting XIs, but Portugal’s front three consisted of Ronaldo and two Silvas. France’s contained Griezmann, Coman, Mbappe and Giroud. Germany had Kimmich, Goretzka, Gundogan, Havertz, Sane and bloody Gnabry which is just unfair.

Hopefully this shows that it may be best to negate the effects of opposition pace by setting up defensively, lest we wish to be the Barcelona 2020 or Brazil 2014 of this tournament. More importantly, hopefully, this demonstrates that our attack perhaps isn’t the generational, mercurial hotbed of star-power that 99% of England fans think it is. Kane, Sterling, Foden/Mount, and Rashford/Sancho as a front line is very competent indeed, and in my opinion, would function best with Kane doing what he’s done for Spurs this season with flying runners on either side of him. Trying to wedge in Grealish, Sancho et al is simply not worth it at the expense of defensive solidity.

Furthermore, for all the fanfare around this generation of attackers, it is worth noting that we don’t actually have an awful defense either. In fact it is very good, at least at first XI level. Maguire is having a good season after a rough early patch. Stones is having perhaps the season of his career. We have arguably a dozen right-backs who could walk into any national team in Europe. Shaw is playing fantastically. In Rice we have a fairly unique proposition at DM that not many other nations have. Whether we plan in a back 4 or 5, we have one of the better defences in the tournament and it makes more sense to lean on them than to oversell our good, but not Best In Class attack. Especially as a lot of the bigger nations have vulnerable defences and strong attacks, and so will be open on the break.

Everyone seems oblivious to the fact that defensive, rigid teams go far in tournaments. France 2018, quite boring. Portugal 2016, incredibly boring. Argentina 2014, very boring. Holland 2010 & 2014, their best tournaments in recent years. Uruguay’s recent World Cups. Iceland 2016. Need I mention Greece 04 again? Spain and Germany have been able to do things their own way, but they had absolutely ridiculous generational teams. We do not and neither have any other nations. When we shoehorned in as many attackers as possible in 2016 we saw how that went. We went out to Iceland despite starting Kane, Sterling, Sturridge, Alli and Rooney.

Pragmatism will do us more good than “going out there and giving it a good go”.

Southgate, you’re the one.
Sam

International football is solved
Come on everyone, lets not shit the bed on international football. I realise the unnecessary games against poor opposition, paying for the privilege to see 11 English millionaires casually wandering around the pitch seems, well, pointless really.

But please remember international football tournaments are amazing. Euro 96, the Russian dream and of course 66. I never used to look forward to a World Cup but then after a week I was hooked. National anthems, random players you’ve never heard of, strange refereeing decisions, fan culture of all colours and creeds. It’s wonderful stuff, okay not the vuvuzela…….

Lots of talk about fixture congestion, pointless games and international tournaments where players are so tired they can hardly check their bank balances. So, how about this (granted it was mentioned by Fifa) but not the whole plan.

Other benefits
Each group of countries players get a guaranteed 8 weeks off every other year
It becomes better economically to host the World Cup
the tournament becomes special again
domestic leagues can be focused and there is more room for European football i.e. Champions league

Any thoughts ?
Will it work ?
Alternatives ?
Hong Kong Ian (Get Fantino on the phone !) LFC

I always thought the most obvious continental counterpart to Newcastle United was Fiorentina. Similarities are legion:

One club-cities with die-hard local support, distinctive kit, a couple of league titles in the black-and-white past, flirted with glory in the 90s, spearheaded by iconic number 9s who loved a thunderbastard, shone in the Champions League all-too briefly and suffered ruin and relegations under various basket-case regimes.

Only real difference is that at least Fiorentina had some silverware to show for their 1990s renaissance, with a couple of Italian cups in ’96 and 2001. Still, in that timeframe Newcastle could’ve won a couple of FA Cups. They were just unfortunate to meet all-conquering Arsenal and Manchester United sides in consecutive finals.

But I can’t think of any other similar-sized clubs with as long a trophy drought as Newcastle’s. Maybe there’s some gypsy’s curse at play? Steve Bruce might have to take a wazz at all four corner flags to lift it if he wants to keep his job.

Alternatively, the club is just run by a corpulent human shrug. You be the judge.
Lee, master procrastinator

I had the privilege of watching Boca Juniors face River Plate at the Superclásico not so long ago. After arriving in Buenos Aires with a couple of friends, we were lucky enough to find out that the match was the next day and the hostel we were staying at was selling tickets.

The night before the match we experienced a traditional Argentine welcome to the British. It didn’t take us long to discover that it’s better to get in a cab where the driver is coked out of his gourd because at least he would get you places on time without actively trying to scam or threaten you. Even more frustratingly, everything seemed to happen an hour late.

Jetlagged, irritable and hungover from clubbing until mid-morning we were delighted to find that the hostel had put on a bus service to the game at El Monumental. Any excitement about watching Riquelme, Ortega and Palermo strut their stuff in their natural environment was soon dampened though. We waited ages for the bus and then found out when stuck in traffic that the rampaging Boca fans on the route to the game had smashed up the other bus that the hostel had laid on and ours might be next.

It felt like a justification of all the xenophobic nonsense about lazy, criminal South Americans that us increasingly cranky ‘gringos’ had been indulging in.

We got to the stadium eventually, but worse was to come for us when the game began. There was no pre-match fanfare. The match kicked off to complete apathy. No ticker tape. You could barely hear the home fans under the constant drone of commercials through the PA. The football was sloppy and the players were disinterested and unrecognisable, albeit with a very vocal away support hyped up after completing a Streetfighter 2 bonus stage on the local transportation. I’ve never been to Carrow Road but somehow, watching this anaemic affair I felt like I already had a season ticket. The players seemed to be about to pack it in after the first half and so were we.

It was that bad. The ‘one football match to see before you die’ was an utter anticlimax.

Turns out us gringos had set our I-phones an hour out and had just witnessed the traditional 45 minute reserve team game before the main event. The Superclásico itself was an entirely different proposition.

Needless to say I had the last laugh etc etc…
Quarantino Asprilla, Chairman of the Bored, ITFC

PS: Let’s hear it for Comoros, the tiny volcanic islands no-one’s ever heard of have reached their first African Cup of Nations.

Club team from one country
Speaking of teams made up of foreigners from the same country playing for the same club, Juventus’ French team is surely in with a shout:

Bonnefoi is a bit of a cheat as he never played an official game but being Buffon’s reserve is close enough, and the rest of the team is a scary combination of solidity, creativity and firepower.
8 European Cup wins, 8+1 World Cup wins (counting Deschamps player + coach), 1103 combined French caps (of which 884 for the first XI alone, which is frankly ridiculous given that Bonnefoi and Zebina have 1 cap between them)

And with all of that said, probably the most amazing thing is that Boumsong has 27 French caps!
James, Switzerland

Liverpool Scottish XI
I’m sure you’ll get an avalanche of these, but I think Dave Liliis’s Irish LFC team, good as it is, would struggle to get a touch against a Scottish equivalent.

Fat Man wants to disallow tax havens from participating in international football, which is a fine, if somewhat arbitrary ruling.I mean, is a tax haven the worst thing that a country can be? What about, say, non-democracies? Or countries currently occupying other countries’ territory which it has taken by force? Or countries with dubious workers’ rights

Because if we’re allowing Russia and Qatar, countries with those sort of issues, not only to participate in international competition, but to host the previous and next world cup, then cracking down on tax havens seems a little odd. Oh, and both those countries have a lower personal and corporate tax rate than San Marino in any case.
Dara O’Reilly, London