Home F365 Says Does Gareth Southgate have a substitution problem? 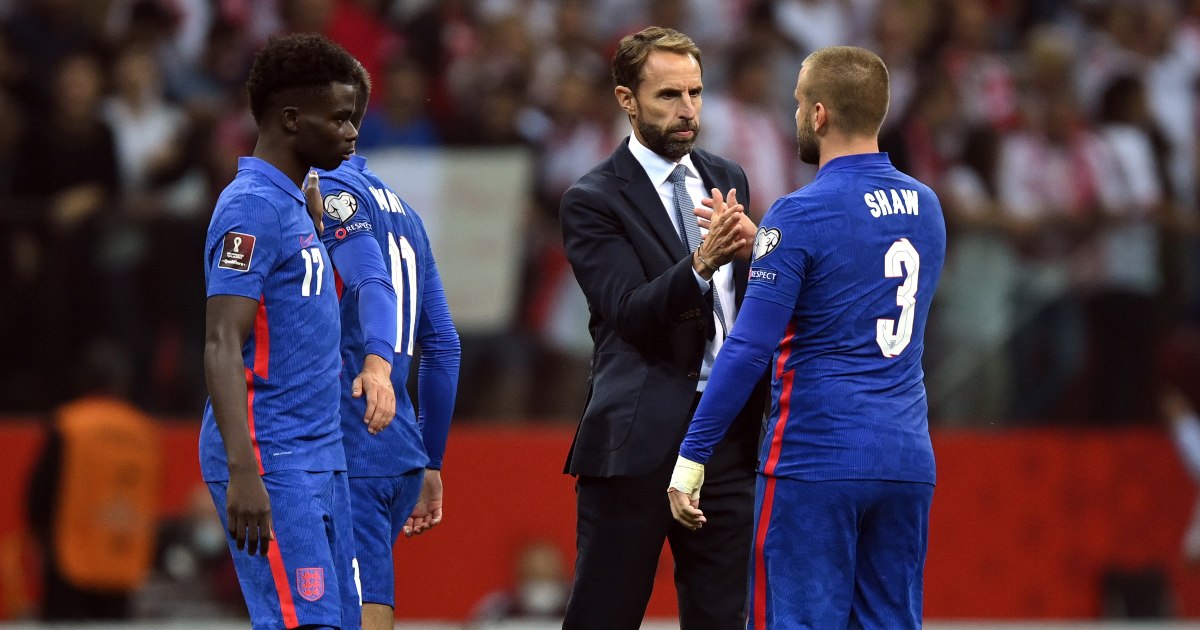 As Damian Szymanski’s header flew past Jordan Pickford and into England’s goal, the crosshairs of national discontent turned towards Gareth Southgate.

The 91st-minute goal that earned Poland a point in September was the first setback the Three Lions had suffered in their seemingly comfortable passage to next year’s World Cup in Qatar. Yet the England boss was coming under fire.

Flick through social media in the aftermath and there was a clear theme among the reaction; Southgate was criticised for fumbling a winning position. Instead of taking the sting out of a game his side led, he stuck with his 11 starters and didn’t make a single substitution.

It was the first time an England manager had refused to use his bench since the Euro 96 semi-final when Terry Venables’ heroes remained unchanged throughout 120 minutes against Germany – a night also revolving around Southgate after his costly penalty shoot-out miss.

While Venables wasn’t chastised for his lack of action that night, Southgate’s indiscretion against Poland was added to a growing call sheet among his detractors that focuses on a perceived passiveness.

Losing early leads against Italy in this summer’s Euro 2020 final and Croatia in the semi-final of the 2018 World Cup will perhaps unfairly characterise Southgate’s role in England’s runs in the past two tournaments. On both occasions, it was only when second-half equalisers were scored that the substitutions came.

So does that represent a trend to suggest that in those big moments, Southgate is left wanting – staring at the oncoming traffic like a petrified rabbit caught crossing a road at night?

The man himself didn’t think so. When asked about his inactivity in Poland during his post-match interview with BBC’s John Murray, Southgate insisted his side were “in total control” and that he had lined up two substitutions to come on late on, but decided against using them when the equaliser went in so not to bring players on “for the sake of it”.

That decision inadvertently left Southgate to break England’s 298-match run since they last failed to make a sub and exposed him to another memorable stat used to undermine his achievements in the job. But the truth is, the moniker of the ‘subless one’ does leave him in good company.

Prior to that grey night in 1996, Venables had made no subs in 90 minutes in two of his previous seven matches – waiting until the second period of extra time to introduce fresh legs in the quarter-final stalemate against Spain in Euro 96. Predecessors Bobby Robson and Graham Taylor were the same, not using subs on multiple occasions – both, strangely, against Poland in World Cup qualifiers – during their stints as England boss.

But the idea of using no subs in a match isn’t some antiquated managerial quirk. In fact, it seems to be something that’s happening more regularly in the past few years.

Pep Guardiola, Jurgen Klopp and Jose Mourinho all broke long-standing runs at their clubs by refusing to make changes in recent seasons. Manchester United’s Ole Gunnar Solskjaer also went 90 minutes without using a sub twice last season, seeing out a 1-0 win against West Ham in March before drawing criticism for remaining unmoved until extra time against Villareal in the Europa League final.

In Klopp’s case, Liverpool were level against Tottenham in a crunch Premier League clash and was vindicated in his decision to stick rather than twist when Roberto Firmino’s stoppage-time winner took all three points. The same happened for Chelsea interim boss Rafa Benitez in the 2013 Europa League final, the Spaniard becoming the first Blues manager to not make a change since the late 90s before Branislav Ivanovic’s 91st-minute header clinched the game.

So perhaps Southgate wasn’t so foolish after all. Although the case could be made that, just as against Croatia and Italy, he was too reactive in Poland and should have made those changes sooner.

Look at Southgate’s major tournament record and there’s not an instantly clear trend to support that case. In the 13 matches he’s managed during the 2018 World Cup and Euro 2020, he’s made the second tactical substitution on six occasions – hardly a damning number, especially considering England were leading in five of those games.

Yet there is one place where a weakness can be found. Discounting this summer’s quarter-final against Ukraine due to England’s commanding lead, Southgate only made the first switch in one of the six remaining knockout matches. And that came in the World Cup semi with Croatia when Raheem Sterling was introduced comparatively late in the 74th minute, long after the Vatreni had asserted their dominance and levelled the tie.

Two substitutions had been made before Colombia’s equaliser in the World Cup last-16 tie, though, and Southgate’s introduction of Jack Grealish at the same stage against Germany at the Euros arguably made a match-winning difference.

It’s also worth factoring in that England have only been behind for nine minutes in normal time of all those knockout games, so the onus is naturally on the opposition to disrupt the flow. A victim of his own success, then?

In all, it’s hard to prove Southgate’s hesitance either way. Context is important, of course, and just because standing firm worked out once, it doesn’t mean it’s the correct call next time.

But when key moments in big games stand out among others, that narrative can be difficult for a manager to shake off. Win and it’s forgotten, don’t and it’s remembered forever.