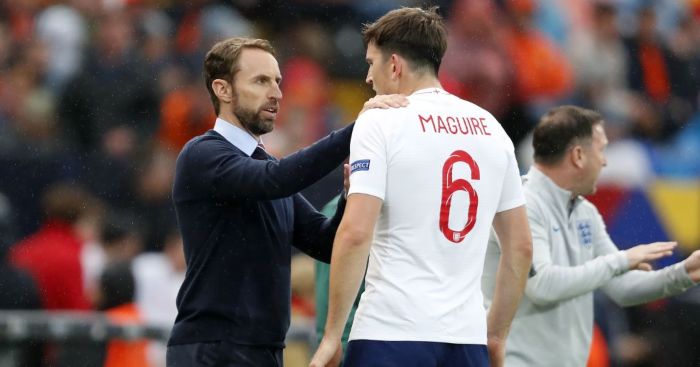 Gareth Southgate says the decision to include Man Utd captain Harry Maguire in the England squad was “not straightforward”.

The inclusion of Maguire has been the main talking point, with the Man Utd man subject of an ongoing hearing in Greece following his arrest in Mykonos in the early hours of Friday morning.

Southgate said in a video on the official England Twitter feed: “Yes it is clearly a decision that is not straightforward and a decision that in the end I could only take on the information I have,” the England manager told a press conference.

“I have spoken with Harry, I have the insight to the story which is very different to what is being recorded. You can only make decisions on facts you are aware of.

“If facts or information changes I will have to review that decision, but I have a fantastic relationship with the boy, he has been a fantastic character for us – he has my support at this moment.

“I’m not going to get into hypotheticals of what might happen, but I have got to reserve the right to review if further information becomes available.

“You always make decisions to the best of your ability given the information you have. People may agree or disagree with those decisions, but it is a position where every manger finds himself.

“Harry regrets the fact he has brought that sort of focus and attention to the team – he apologised for that – but also has his own side of the story.”

On the call-ups for Phil Foden and Mason Greenwood, Southgate continued: “They are used to coming here and have been involved with England in the junior teams, so for them they are used to being part of an England team.

“This is a step up for them, but they are both more than capable.

“They have shown playing in big matches at big clubs that they are talented boys.

“They are both hugely exciting players and I think they will be part of England’s future.

“We have given them the opportunity, it is up to them to go and take it forward, but there is no reason why they can’t be involved with England for years to come.”

Southgate continued: “You are always questioning with those young players when is the right time to move them up, we felt now is a good time.

“We are a year away from a European Championship and let’s see if they can start to break into that team, that squad.

“It gives us great competition for places, they are realistic challenges.”