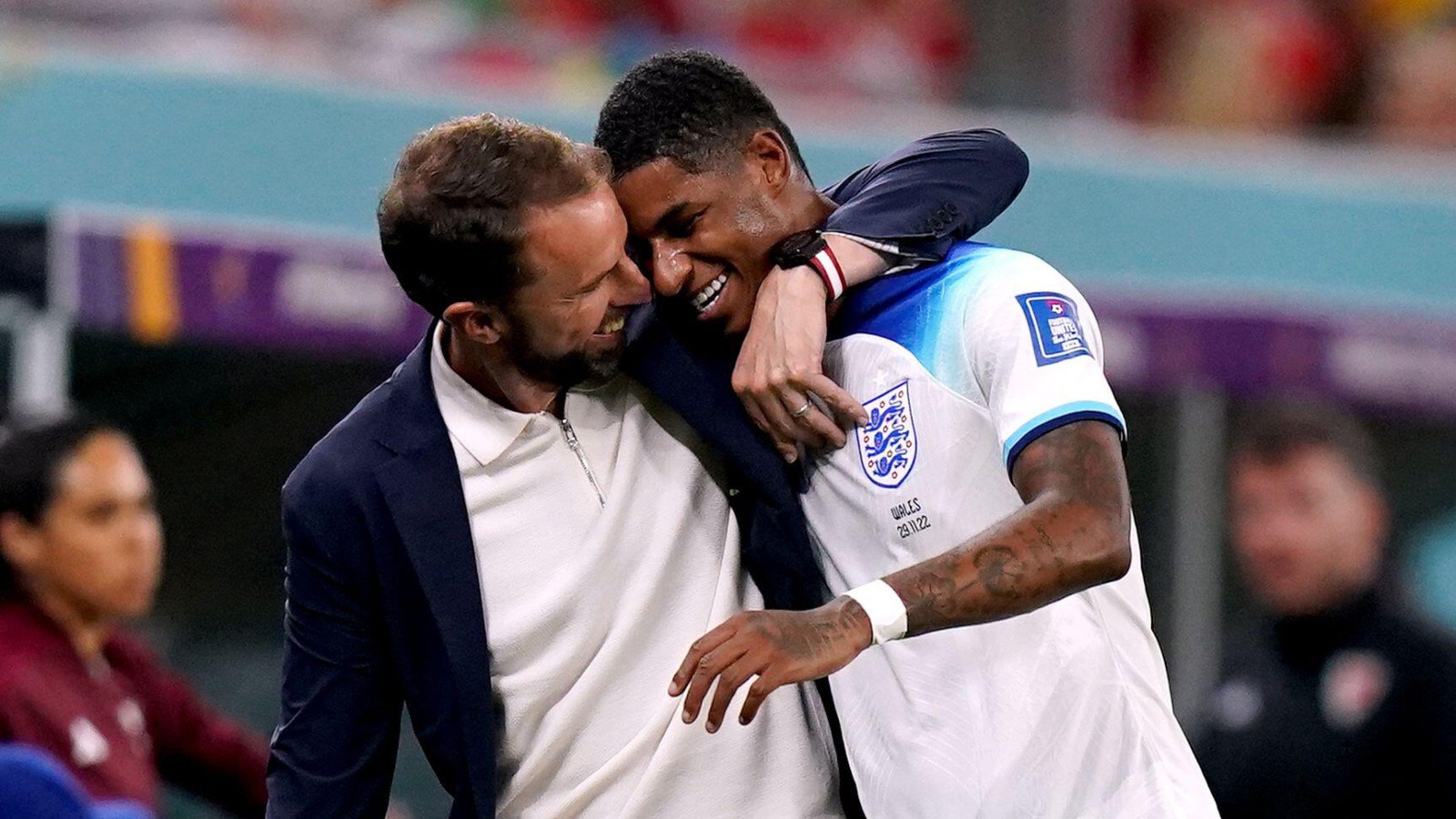 The usual England critics are quiet after that simple win over Wales to take them into the last 16, with Gareth Southgate getting some rare credit.

Send your views on England or anything else to theeditor@football365.com

Any chance you can stop criticising Southgate now?
With a more-or-less inimitable combination of footballing acuity, team/man management skills, media skills, a general good-head-on-his-shoulders level of equanimity and – oh, yes, – the trifling matter of repeatedly producing actual results at major tournaments, Gareth Southgate is nothing short of a godsend for England.

Anyone, including those on this esteemed site, who thinks England can do better with some mythical replacement ought to stop window-shopping and perhaps reflect on how England fared with his most recent predecessors this century (puts on specs, peers at sheet): Big Sam, Roy, ‘Psycho’, Capello, Steve McSomething and Sven.
Ebrahim (or let’s just bin him for Jose…always good for a laugh!), MUFC, Seattle

…To continue on the thread, another reasonable performance from the England defence, resurrection of Slabhead. Walker now takes over from Trippier. But apart from right back the side will be the same as against Iran for the last 16 knock-out game.

This Wales game was almost a dead rubber, wherever that expression came from, so Foden & Rashford and Hendo back on an admittedly very good, if not the finest, bench . Of course, a bit of luck is needed in knock out games . On paper England ought to be beating Senegal. Lots of humble Senegalés around here so I won’t be bragging if England win.

France is not a given though if they do meet England in the quarter final it’d be worthy of a grand final. May the better team on the day win then.

Last 16, proper cup competition from here on in. Love it !
Peter (all hail Gareth Southgate), Andalucia

Sent at half-time; not heard anything since
England must be one of the most boring teams in the world to watch. Slow, ponderous, pointless backwards passing. Absolutely awful. Send them home with Wales. They won’t be far after them anyway.
Weldoninhio, BAC

England 3-0 Wales: 16 Conclusions as the handbrake is released, Rashford shines and Bale vanishes

Carrick is not undercapped
Michael Carrick as good as Busquets, Xabi Alonso etc. unquestionably ticked off because Pep said it? Hmm. No. He doesn’t have the defensive awareness of Busquets and certainly doesn’t even begin to approach the range of passing of Alonso.

Henderson is a very different player, not just a straight defensive mid so not sure why you have compared the two, but needless to say, Henderson’s passing range and versatility (he has scored some spectacular goals and some beautiful assists with the outside of the boot even this season to Mo Salah and so this versatility in being the sitting mid/defensive mid/ attacking mid is obviously the reason he played much more than Carrick who was very limited, plus his leadership – he has lifted basically every trophy available (he even has an iconic celebration-look up Hendo Shuffle).
Jeremy

Proud to be Cymru
We were a bit rubbish, we went out with a bit of a whimper, we’ve lost a bit of our style of play in the last few years, but I think on the whole fans will still be so proud of the team. The fans have been fantastic too, and deserve all the praise in the world.

Our golden generation is coming to its end and in the grand scheme of things they’ve achieved so much. A first World Cup in 64 years, back to back qualification for the Euros – with a bit of help from the number of teams being expanded – and a semi-final in 2016.

The last of that 2016 cohort are on their way out, and time has clearly caught up with them, but they’ve dragged us into a World Cup and while I’m sure they’ll be hurting to have gone out, should still stand proud and have their heads held high. They’ve given the fans memories they’ll never forget, especially in 2016, especially that game against Belgium, especially that Robson-Kanu goal.

Let’s not forget Cymru is one of the smallest nations at this World Cup, Cymru is a nation without a professional football league, the FAW budget is tiny, the player base is tiny, and football is not our national sport (rugby union still very much holds that title). Hopefully the success of recent years will drive Cymru onto further success in the future. Hopefully we won’t have to wait another 64 years to go to a World Cup, and if we do, hopefully it won’t be in Qatar.

But to the golden generation, put simply, diolch. Thanks for the memories.
Simon Evans

Oh Gareth Bale…
During this World Cup, I have read a lot about Wales’ increasing reliance on Gareth Bale to pull something out of the fire and rescue them in matches.

Now, when this works, there is nothing particularly wrong with this, but when it’s your plan A, and plan A isn’t working and you don’t really have a plan B, well you saw what happened yourselves.

But what I wanted to write about was Bale. Is he himself hoping that he will be able to pull something out, a moment of magic to rescue the game?

I wrote in after the Iran game saying that who would have thought going to LA for 6 months before a World Cup to keep ticking over was not the best preparation.

But now I am thinking it may have been arrogance on Bale’s part. Did he think he could just turn up, play the hits and it would all be ok?

There was a responsibility on his shoulders as Wales best and most high-profile player going in to this World Cup, and one he seemed to welcome.

But he also had a responsibility to arrive in good form, and peak condition, and by the evidence of the last three games, he was in neither.
DC, BAC

Portugal are pedestrian
Roberto Martinez has taken a well-deserved kicking in the mailbox but over the past years, the guy who has mysteriously managed to avoid criticism is Santos. Yes, he won the Euro – not very convincingly, I might add, but given the players at his disposal, you would have to agree that he gets a bunch of technically gifted players to play some pretty dour football.

Portugal tend to walk through games, relying mostly on individual talents. There’s little fluidity, and they don’t look up when in possession. Runs by forwards into empty spaces are largely ignored. There are no patterns, and not much telepathy. They get away with it because they have a bunch of players – Silva, Fernandes, Cancelo, and others, who can make things happen on the pitch. But surely, you would expect this team to thrill, which they rarely do.

If Southgate is accused of playing with a handbrake, Santos is arguably doing the same but with a high calibre sports model.

And the penalty wasn’t the fault of VAR, but the rules. Let’s not shoot the messenger.
Ved Sen (MUFC)

Snickometer cynicism
Anyone else think that the Adidas snickometer in the ball is absolutely bullishit? The Germans have form with the VW emissions and the vacuum cleaner testing. You telling me that the one time Ronaldo no less needs to prove his greasy mane licked a ball for a record beating goal and Adidas have a chip in it for the first time ever? How’d they even find the same ball or does each ball connect to the internet?
Alex, South London

Football should copy China protest
This probably won’t get published if anything interesting happens with the England/USA/Wales/Iran group this evening, but figured I’d try anyway:

This Chinese citizen protest of holding up blank sheets of paper to represent censorship is really clever (and brave of them). I really think footballers/fans should copy it in Qatar. Firstly, it would send an obvious message which would be difficult for FIFA/Qatar to punish. But moreover, it would also say quite a lot if FIFA/Qatar were seen to be more draconian in applying punishment to protests than the Chinese government.
Oliver Dziggel, Geneva Switzerland

Is everyone welcome at UK-hosted tournaments?
I fully agree that football should be for everyone and that anyone in the world should be welcomed by countries hosting major sporting events. I’m guessing the majority of the people writing in though to talk about Qatar have not had the experience of travelling to/through the UK and Europe as a non-white outsider (with a non-UK/American English accent).

Well over 60% of the population of the world (possibly close to 70%) are not welcome in the UK without a visa approved by their local UK embassy. Anyone going through the visa process knows that these visas are extremely hard to get and are most often rejected without explanation or reason. These nameless, faceless gatekeepers are charged with keeping the “riff raff” of the world out. Are we all welcome? Are we really? On the other hand, Qatar offers visa-free entry to all citizens of both India and China (2.7 billion people in those 2 countries alone).

The last 2 times I travelled to the UK, the way I was treated by border officials at the airport upon arrival made me feel like a criminal, even though I had valid visas, legitimate reasons to enter and only planned on staying a few days. Travelling throughout Europe has also brought me face to face with more racism than I have faced anywhere in the world. I have been refused service in stores in Brussels, arbitrarily stopped by police throughout Eastern Europe who demanded to see ID/my passport for no reason other than I’m not white, and been called pejorative nicknames in Spain, Greece and Italy. A few years ago, I decided, for the sake of my dignity, to not to travel to Europe unless it’s really necessary.

So yes, Qatar needs to change its policies and laws to be more inclusive and respectful of all. But let’s remember that the vast majority of the world is not welcome in the UK (I saw we were talking about Australia recently without mentioning their offshore detention camps). The vast majority of people in the world do not get the pleasure of being treated in the way I was within the borders of the country that colonized our lands, subjected our peoples to horrific abuse, built their prosperity on our stolen natural resources and still refuses to return many of the treasures that were looted (because our visa applications are rejected by your lovely consular staff).

No country is perfect. Qatar is far from perfect and needs to make progress in many areas. The UK and the Western World do too.
Danny

Cody Gakpo is Man Utd’s answer to Haaland
I have read the recent reports about Man United having reached an agreement with PSV to sign Gakpo with interest. Following the exit of CR7, it is becoming increasingly imperative for United to sign a new forward or striker. His versality and ingividual skills aside, Cody Gakpo comes with the added advantages of the ability to function effectively anywhere on the frontline, an affordable asking price and, clearly, better value for money than Osimhen and the other options. United need a forward who score goals and Gakpo incredibly fits this as he has demonstrated the amazing ability to score goals for his Club and country. Scoring goals is Gakpo’s DNA. No other player comes so close to Erling Haaland. Needless to add that he is ready and willing to move to Old Trafford.
Professor (Dr) David Achanfuo Yeboah