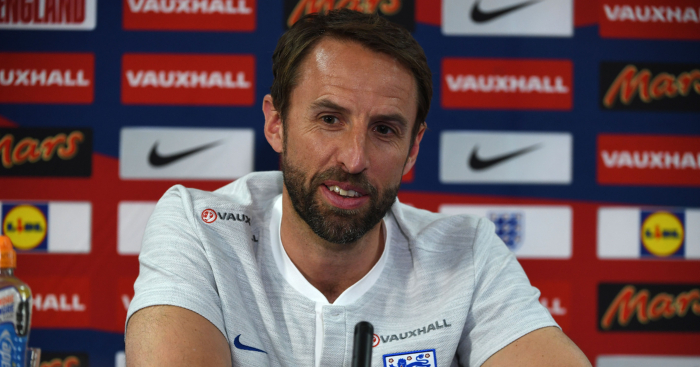 Who would write such a thing about one of the nicest men in football (according to Danny Rose, at least)? Who would rush to such judgement without seeing him manage a single England game? Who would write any sentence that included the word ‘sexless’? You will have worked out by now that I have sheepishly raised my hand, reluctantly happy-ish to admit that I was as underwhelmed as anybody by the appointment of the safest of safe pairs of hands.

And yet I now love him. I want him to be my own harmless, sexless boyfriend. I expect he would decline such an offer, but he would decline so politely, so sensitively, and with such a light touch of self-deprecating humour, that I would not love him any less.

For it turns out that Southgate is exactly what England needed; we just never knew it. We did not know that we wanted to see an England squad being treated like adults (“Most of them have young children. I am not going to treat them like children”) or an England manager who talks about the World Cup like we we would talk about the World Cup (“We are going to play for England, going to a World Cup, which is the highlight of anyone’s career, with a group of mates. It is fantastic”) or an England manager who makes jokes. Actual jokes. Like a normal person.

The football has been exactly as good as England’s resources, with Southgate sensibly putting emphasis on pace and movement, shamelessly piggy-backing on the success of Manchester City, Liverpool and Tottenham in filling his squad with players from those clubs. England look weak in central midfield and in central defence precisely because they are weak in central midfield and central defence; Southgate is a lovely man but he is no conjuror.

There have been innovations – Kyle Walker at centre-half, Raheem Sterling as a No. 10 – that have been as pleasing as they were surprising, while the decision to leave Joe Hart at home has to be applauded. There have been opportunities for young players, but older babies have not been thrown out with bathwater in pursuit of an England team doused in England DNA. It has been revolution cunningly disguised as evolution.

But it is off the pitch where Southgate has truly impressed, where he has spoken eloquently about racism, politics, expectations and occasionally even football. He has spoken out about and against the media’s treatment of Raheem Sterling, while still giving the same media unprecedented access to his players ahead of a World Cup. Some elements of the media might be reluctant, but he is trying to drag everybody along on the same side. The players are to be protected – his treatment of Sterling after his late arrival was exemplary – but at the same time they are to be trusted as adults.

It’s only in this kind of environment that Rose felt able to tell reporters that he had been struggling with depression. After all, it is only eight years since Leighton Baines was ridiculed for saying he would miss his family if he was picked for the tournament in South Africa, and that admission was thought to have played at least some part in Fabio Capello’s decision to leave him behind. This is a far more holistic England.

“He’s based up here at George’s Park quite a lot so I would bump into him during my rehab and I would occasionally have dinner with him,” said Rose of the England manager. “Even away from here I’ve had the odd text message or phone call – one of his best qualities is that he’s one of the nicest men I’ve come across in football.”

The cynical response is that such an environment is far easier to create when expectations are so low, and we may well be singing a different tune in two years’ time when anything less than progress to the European quarter-finals will be failure.

But right now, England’s best chance of over-achieving lies in the hands of a man who remembers being a footballer not so very long ago and manages men (and they are men) how he would like to have been managed. If they are comfortable, if they are happy, if they are not put under ridiculous amounts of pressure, they might just surprise us. Their manager certainly has.