Southgate is 'seething' and 'livid' with Walker. The England boss 'will not tolerate those who step out of line'. 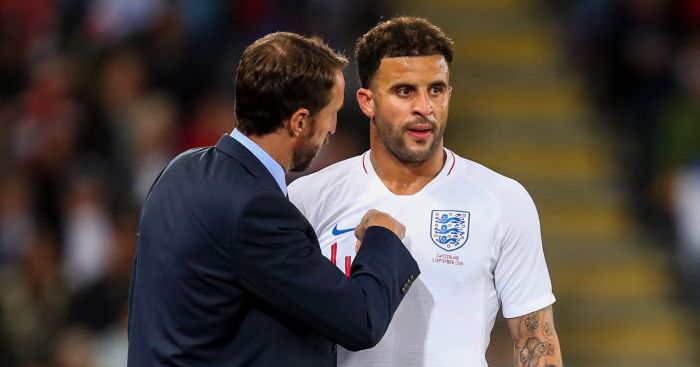 Gareth Southgate is ‘seething’ with Kyle Walker and will never pick the Manchester City right-back for England duty again.

Walker has been embroiled in controversy this week after it was claimed he paid £2,000 for two sex workers to visit him and a friend at his home during the state-enforced lockdown.

The 29-year-old published a video the same day urging people to “to just bite the bullet and think about others rather than yourselves”.

The situation has rather understandably left England manager Southgate ‘livid’, with the Daily Star suggesting his international career is over.

Walker ‘will never be picked for the Three Lions again’ as long as Southgate is in charge, while City are considering handing out a £250,000 fine for breaking government rules.

A club spokesman announced that an internal investigation will be held into the matter, stating: “Manchester City are aware of a story in a tabloid newspaper regarding the private life of Kyle Walker in relation to a breach of the UK lockdown and social distancing rules.

“Footballers are global role models and our staff and players have been working to support the incredible efforts of the NHS and other key workers in fighting the effects of Covid-19, in any way we can.

“Kyle’s actions in this matter have directly contravened these efforts. We are disappointed to hear the allegations, note Kyle’s swift statement and apology, and will be conducting an internal disciplinary procedure.”

But Southgate sees Walker’s actions as ‘the final straw’ as he ‘will not tolerate those who step out of line and disrespect their profession’.

Walker last played for England in the Nations League third-place play-off in June 2019.