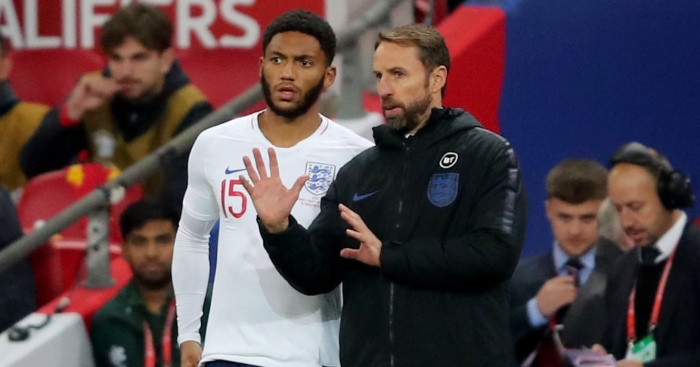 England manager Gareth Southgate has responded to the injury of Liverpool defender Joe Gomez, calling it ‘upsetting’ and ‘painful’.

Gomez picked up a knee injury while training with the national team earlier today.

He has since been withdrawn from the England squad to have a scan on the injury.

MAILBOX: Arsenal happy with Arteta due to lower standards than Man Utd

It’s thought to be a ‘serious’ knee injury, although it’s not yet clear whether it involves his ACL.

Speaking after the incident, Southgate said: “I can’t tell you how serious it is because he’s yet to have scans.

“What was upsetting was to see he was in a fair bit of pain and the fact was there was nobody around him when the injury happened, so I didn’t like that element of it.”

When asked if the injury could be a problem with his ACL, Southgate responded: “We’ve just got to wait and see what the scans show and we’re all hopeful for him that it’s not what it might be.

“It’s not a good situation. I don’t see him being involved in the games with us, that’s for sure.

“My immediate thoughts are with him because he’s had some difficulties with injury in the past, so we’re hoping as much as we possibly can and praying that it’s not going to be a long-term one.

“Joe is a good example. We know the load he’s had in the last six weeks so we gave him and the lads who’d been involved in European matches an extra day’s recovery and yet still something like this has happened.”

The news is devastating to Gomez and his Liverpool manager Jurgen Klopp.

It means Joel Matip is now the only senior centre back in Klopp’s squad, following injuries to Virgil Van Dijk and Fabinho.

Van Dijk is expected to miss the rest of the season after undergoing knee surgery.

Fabinho picked up an injury against FC Midtjylland in the Champions League.

The first game Liverpool will have to negotiate after this is against Leicester on Saturday 21st November.