Home All The News Neville: Why Fergie wouldn’t give Ronaldo, Rooney the Man Utd captaincy 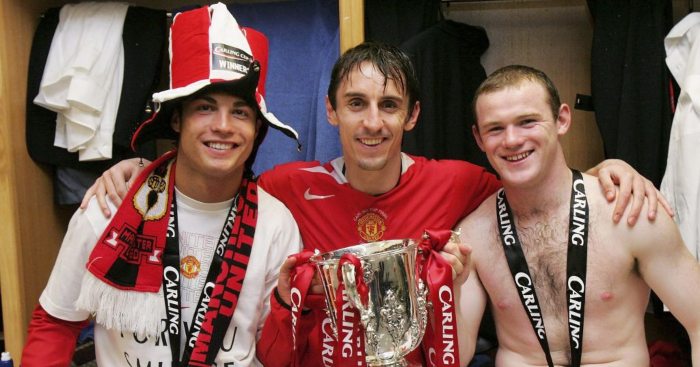 Gary Neville says that Sir Alex Ferguson wouldn’t give Wayne Rooney or Cristiano Ronaldo the Man Utd captaincy as he predicted both players would “kick off”.

Neville had doubts about his own captaincy after feeling his level had dropped below the level of the rest of the first-team squad following a bad injury.

But when he approached Ferguson about the possibility of passing the armband on, Neville was told in no uncertain terms that he would remain skipper.

MAILBOX: Man Utd have an easy choice to make between Sancho and Kane

“I got injured a year after taking the captaincy and that became really difficult for me,” Neville told Sky Sports.

“It felt as though I wasn’t contributing like a captain should be for my last four years. I actually went to see Sir Alex in pre-season about the third year I was captain.

“I went over to Sir Alex walking onto the training pitch and said, ‘I don’t feel worthy of keeping the captaincy anymore. This team is to a level I can’t compete at’.

“So literally I think me and Giggsy kept it for three or four years beyond that just purely because of the fact the camaraderie in the dressing room. We were the policemen if you like, the older statesmen.

“Sir Alex wanted to make sure the team came first. Even though I felt unworthy as a captain at that stage.”