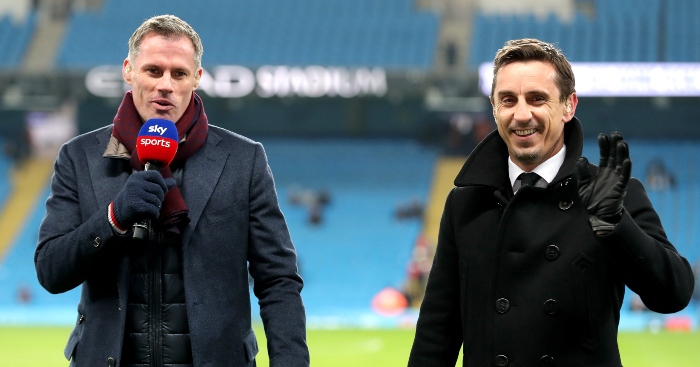 Bruno Fernandes is our Premier League player of 2020

It was Son Heung-min who was included on the left side of a front three with Tottenham teammate Harry Kane down the middle.

And Coady’s inclusion was one of the main points of contention.

“Coady to be fair with Wolves’ defensive record, breaking into the England team and his stats were as good as any of the rest. Laporte’s missed games, it just became a choice.

“I think making the step up with the international team and his personality in defence as well he deserves to get in.

“We talk about keeping clean sheets, his passing from the back is as good as anyone.

“There is possibly only Virgil van Dijk in the Premier League who is better as a centre back. That back five almost picked itself.”

The other point of debate was over who should be picked next to Kane and Salah in the front-three.

Neville said: “You cannot criticise Son or Mane. There’s no negatives about them and every club in the world would want Son or Mane playing for them.

“But when you plug the goals and assists in Son has done better in a team that’s not done as good as Liverpool but that’s no reflection on Mane.’

Carragher agreed with Neville as he added: “I love Mane but he’s going through a spell at the moment with one goal in nine games and Son has been off the charts you can’t not pick him.”