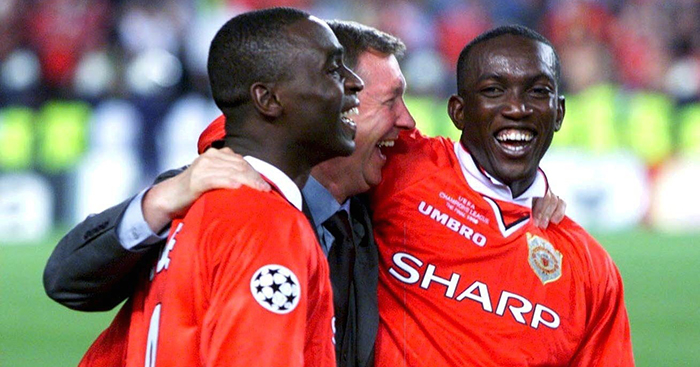 Neville played with brilliant strikers throughout his time at Old Trafford.

But the Sky Sports pundit believes Yorke and Cole’s “sensational” link-up play gave them the edge.

“Yorke was an unbelievable player,” Neville told Sky Sports. “He could do all things; he could score, set up play, run in behind, dribble, bring other players into play – he was the all-round centre-forward.

“It transpired that whatever combination of the four strikers we had on the pitch that season they all could play together, they all had good combinations with each other.

“For the treble season alone, Yorke and [Andy] Cole were the best [strike partnership I played with at Manchester United]. They were sensational, the way they played together. They lit up the whole league, they lit up Europe.

“I always remember a game at Barcelona in the Champions League group stage, I’d never seen anything like it. We conceded three goals – I was playing at centre-back – but we scored three and Yorke and Cole were absolutely brilliant.

“When Yorke signed in 1998 it was after the start of the season and it was a surprise in some ways because I came out of nowhere.

“Yorke and Cole didn’t hit it off from the start, it took 10 to 15 games from memory. Leicester away [Yorke scored a hat-trick and Cole notched a brace in January 1999] sticks in my mind, something just happened that day and after that they started socialising together, getting on off the pitch and a respect between each other developed.

“The thing about that partnership is that neither minded who scored, something you wouldn’t have seen with partnerships involving Ruud van Nistelrooy and Michael Owen, who had to score to be happy.”