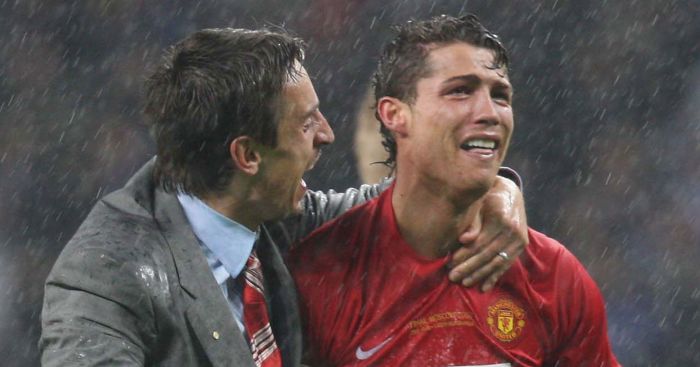 Gary Neville claims former Man Utd team-mate Cristiano Ronaldo came back from the 2006 World Cup a different player with “fire in his belly”.

The Red Devils signed Ronaldo from Sporting Lisbon for £12.25m in 2003 and the Portugal international enjoyed six successful years at Old Trafford before moving on to Real Madrid in 2009.

Now at Juventus, Ronaldo has amassed an incredible array of team and individual honours, including five Champions League titles and five Ballon d’Ors.

Neville told The Football Show on Sky Sports: “He was incredibly driven. I knew him more professionally than personally but his drive was out of this world.

“He was one of the few players that would announce that individual trophies were important to him. Most would say the team is more important but he would say ‘I want to be the best player in the world because in turn it would help my team’. He wanted to be the very, very best in the world and what he’s done over many years is exceptional.

“It’s an obsession with scoring goals, applying himself every day, being the fittest he could be. He’s lifted his standards every year. I’ve got no doubt he will want to continue playing and overtake Pele’s numbers. He wants to be the greatest of all time and understanding along the way that the teams he plays in will be successful.

“In that 2006-07 season. He was breathtaking. He had fire in his belly, hunger. It went from wanting to give up on him in those first few years to when it started to happen after the 2006 World Cup.

“When you look at the season it was when all the negative aspects of his game just disappeared. When a player starts getting 30 goals and 15 or 20 assists you can put up with anything from them. It was match after match after match and in a two-year period I’ve never seen anything like it on a pitch at Old Trafford.

“It’s very rare you can say you’ve had the best player in the world bar none and I think we did that season. Sir Alex and Carlos Queiroz both championed him and believed in him. He came back from the 2006 World Cup and his maturity had changed. His appearance and physical attributes completely changed overnight.

“He was scrawny, wiry and not very strong and then all of a sudden he was a supper middleweight boxer. He was incredible from a strength point of view and the ability to leap, change direction, everything fell into place. From that moment on you knew he was going to be really special.”