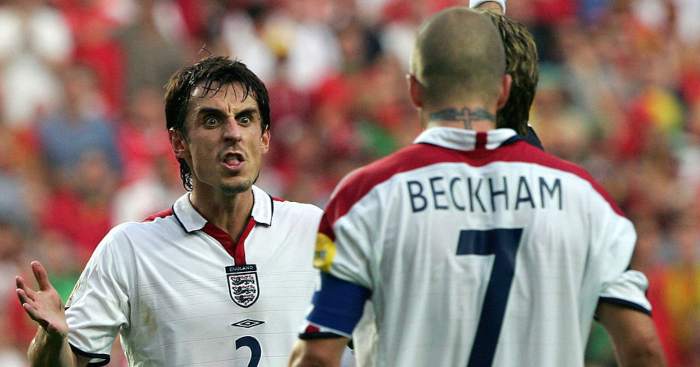 Gary Neville and David Beckham “had two big problems” when rooming with one another at Man United.

Both members of the fabled Class of ’92, Neville and Beckham broke into the Man United first team at roughly the same time.

Neville made his debut in September 1992 but became an established starter by the 1994/95 season, while Beckham’s first start came in the same month as Neville’s but he would not emerge properly until a season after the right-back.

As a result, they frequently roomed together but found that their respective sleeping patterns “weren’t compatible with each other”.

“I roomed with David Beckham for about six months and then the whole rooming with players completely stopped because everybody went into their own individual rooms,” he told Sky Sports.

“I think they worked out that players weren’t compatible with each other and that each went to bed at different times.

“I had two big problems with Becks (well, he had with me!) I used to go to bed at 9pm and wake up at 5am, he would stay up until 11pm and want to wake up at 8am, so essentially he was keeping me up from 9 until 11 and then I was getting him up at 5 in the morning, so it just wasn’t working at all.

Ferguson ‘had no idea’ of Man United title winner’s struggles

“Secondly, he is the cleanest person. He gets into his room, he lights candles, he puts pictures up – everything has to be absolutely perfect, it’s been the same since he was 18.