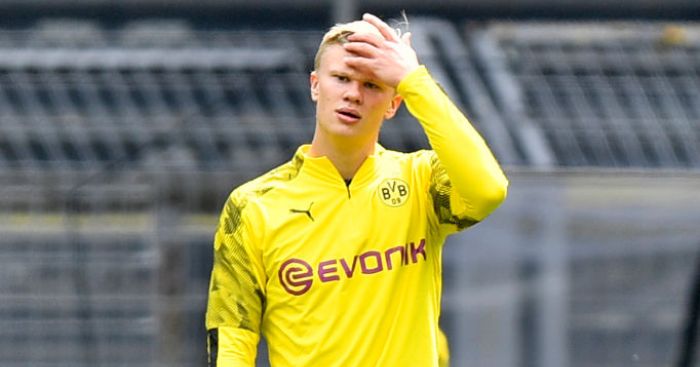 Gary Neville has defended Erling Haaland over the criticism he has received for some of his blunt post-match interviews.

Haaland came under scrutiny after appearing to give an astonishingly short post-match interview in the aftermath of their 4-0 victory over Schalke 11 days ago – but it was later revealed to be an edited version a longer interview.

The likes of Piers Morgan have criticised the 19-year-old, the Good Morning Britain presenter said: “You’re a good player young man but your arrogance with the media is unedifying.”

MAILBOX: Giggs overrated? Isn’t he one of 25 Untouchables?

However, Neville thinks it’s a breath of fresh air in a time when supporters are crying out for bigger personalities.

“He’s a young player under pressure, the fact he’s doing interviews is a good thing,” Neville said on Sky Sports.

“I think we constantly talk about having no characters in the game, players coming out and giving mundane answers that show no arrogance.

“He looks to me like a massive personality. Someone who, when you think of [Zlatan] Ibrahimovic over the years, [Eric] Cantona in interviews. The people who make you the most fascinated when you listen to them.

“I hope we’ve got someone here who’s on the brink of doing things differently.”

Neville added: “There are a lot of interviews on our channels who come on and they’re almost scripted.

“The idea that a young player comes out, shows a little bit of arrogance and spikiness, we should be welcoming it.

“He certainly shouldn’t be criticised in my opinion.”