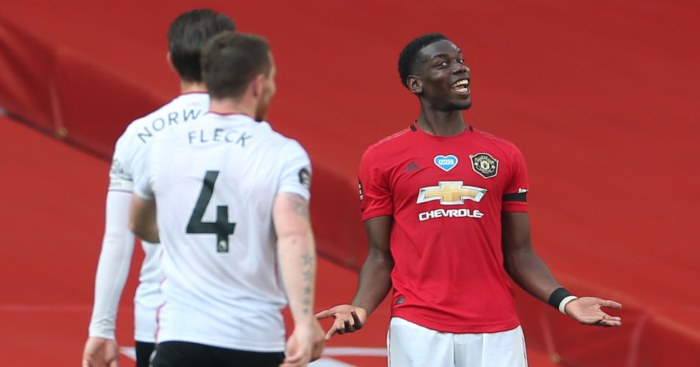 The Frenchman has produced two good performances for the Red Devils since the Premier League restart, coming off the bench against Tottenham and winning a penalty, while he looked comfortable in their 3-0 win over Sheffield United on Wednesday.

Bruno Fernandes was the most advanced midfielder against the Blades with Pogba playing deeper alongside Nemanja Matic in central midfield.

And Neville would like to see Pogba allowed to play further forward for Man Utd like he did against Spurs a few days earlier.

“He’s just alongside Matic in that role a little bit deeper. He did look a little bit better the other night when he was in that roaming role and was able to go right, left, move around the pitch a little bit like Bruno is doing now.

“I wondered whether Ole Gunnar Solskjaer would just sit Matic and then just put the two in front so they could both be higher up the pitch but Pogba’s deeper. Just think his goals and assists record is very good Paul Pogba so you want him to receive the ball as hight up the pitch as possible.”