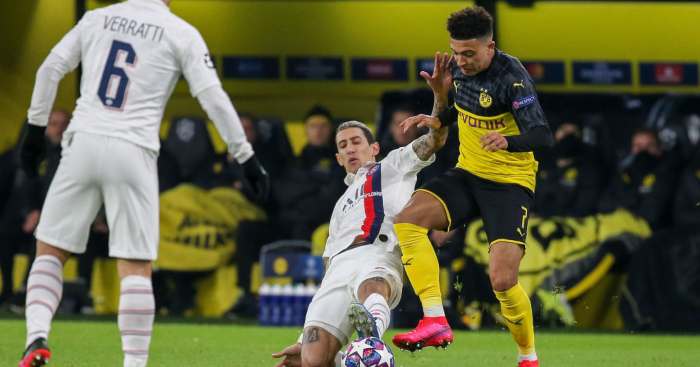 Gary Neville has warned that Jadon Sancho is still “nowhere near” Angel di Maria, who only lasted a year at Man Utd before being shipped out.

At just 20 years of age, Sancho has become one of European football’s hottest properties since his departure to the Bundesliga nearly three years ago.

The England international has stepped it up a gear this term, having scored 17 goals and assisted 19 others in 35 appearances and now reportedly tops United’s list of targets for the summer transfer window.

OPINION: Jadon Sancho is too good to join anybody but United…

Hopes of a switch were bolstered after current club Borussia Dortmund previously admitted that they would not stand in Sancho’s way if he has his heart set on departing the Bundesliga.

News that the player’s price tag had been slashed from £120m to around the £100m mark further heightened speculation of a switch to Ole Gunnar Solskjaer’s side.

However, former Man Utd full-back Gary Neville has urged the club and football fans everywhere to not get carried away with the excitement surrounding the forward.

Despite his exhilarating performances in the yellow and black of Dortmund, Neville believes Sancho is still a long way behind many overseas stars who the English public often take for granted, like Di Maria.

“To be honest, Jadon Sancho in this moment of time… we get carried away,” Neville told  Sky Sports.

“I think we’ve got an amazing group of young English players. But we have to consider the other players that exist, Brazilian players, Argentine players, German players, Belgium players – we are not the only country in the world.

“That’s how it was as an England player and an England coach, ‘we have a golden generation’. You say golden generation and obviously, it was Becks (David Beckham), Stevie [Gerrard], Frank [Lampard], [Wayne] Rooney, but then Brazil had Rivaldo, Ronaldinho and Ronaldo, what’s that… platinum?

“You say we have a golden generation but you forget these other countries have world stars.

“It’s like, ‘hang on a second’. Argentina have Aguero, Higuain, Messi, Di Maria, how good are they compared to Jadon Sancho? Jadon Sancho is nowhere near these players.

“Let’s be clear, Jadon Sancho is a talent, but we can’t start putting him in the category with world stars who are winning European cups and World Cups regularly, season in, season out.”