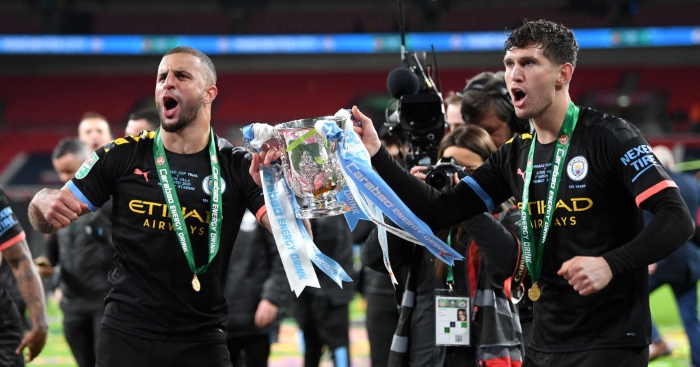 Pep Guardiola’s side took a two-goal lead as both Sergio Aguero and Rodri found the net in a one-sided opening half-hour.

City appeared to be cruising towards half-time with a comfortable advantage before Mbwana Samatta pulled one back for Villa thanks to a slip from Stones.

“I’ve said he’s at a crossroads in his career where he’s got to stop making mistakes but he’s made a big one and it’s let Aston Villa back in this cup final.

“Pep Guardiola has sat back down, stormed to his bench.

“The quality is magnificent on the cross and Samatta has had one chance with his head but he doesn’t miss the second.

“Pep Guardiola puffs his cheeks. He can’t believe that his team have let Aston Villa back in this game.”

Micah Richards and Jamie Redknapp had some sympathy for Stones as they discussed Samatta’s goal during the half-time break.

“We were talking him up before the game but it’s difficult when you’ve been out for that long,” ex-City defender Richards said.

“But I can’t make excuses, it’s a simple header and he’s got his feet tangled up.”

Redknapp added: “He got himself in a bad position but I feel for him because we see it happen to other defenders and it gets cleared away.

“But everything seems to be going wrong when John Stones plays. ‘That is unfortunate and he has to react now.”