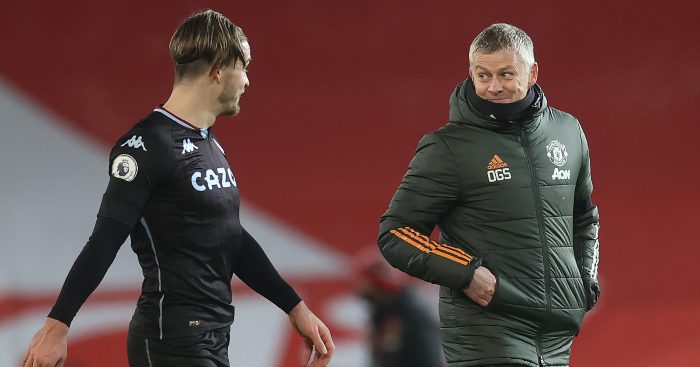 Grealish got an assist for Villa’s equaliser as the Red Devils beat Dean Smith’s side 2-1 at Old Trafford on Friday night to move level on points with Liverpool at the top of the Premier League.

There were rumours in the summer that Man Utd wanted Grealish and links have persisted that they could make a move for him in the next two transfer windows.

OPINION: Bailly and Pogba positives give Solskjaer plenty to ponder

However, Neville doubts United will go for Grealish with their wealth of options in midfield already.

Neville said on Sky Sports: “I think it’s very unlikely that Manchester United will move for Jack Grealish, as good as he is. When you think of Van de Beek, Pogba and Fernandes, the type of players Man United have…

“There’s no doubt there was accusations a while ago about whether Grealish was style over substance, but he’s now delivering on a far more consistent basis. He’s a brilliant player for Aston Villa.”

Neville’s former Man Utd team-mate Andy Cole reckons Grealish has the ability to play for the Red Devils if they were interested.

Cole added: “I think what he’s showing at the moment and in the past few seasons is that he could play for any of the top four teams.

“I’m not being disrespectful to Aston Villa but he’s their talisman and everything goes through him. They won’t want to lose him. We all know he’s a quality player.”