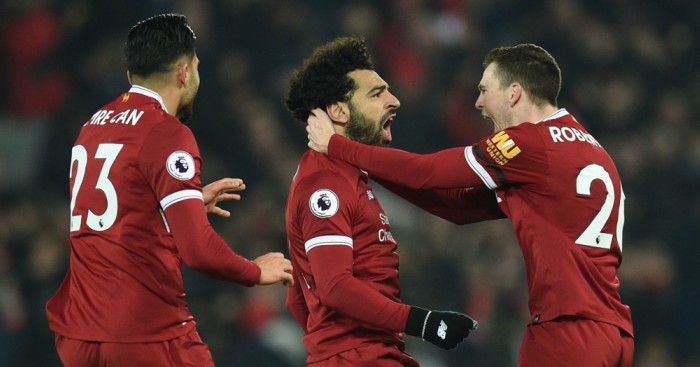 Gary Neville has named his Premier League Team of the Season, making four changes from the official PFA side.

Neville has also altered the formation from 4-3-3 to 4-4-2 to accommodate five Manchester City players and three from Liverpool.

The first change sees Vincent Kompany replace teammate Nicolas Otamendi at centre-half alongside Jan Vertonghen. “Otamendi’s had a good season but there’s something that holds me back from full championing him as my player of the season,” Neville told Sky Sports. “I have to say all the stats point towards Otamendi but I’m going to go for Kompany.

“For me, the last two or three months have stuck in my mind. If you’d asked me at Christmas, I may have given it to Otamendi but now it’s just an instinct and something I’m feeling inside, and that’s what I’d do if I was a player in the dressing room voting for the team of the year. I’d go for Kompany because on and off the pitch he’s vital.”

The former Manchester United right-back did not agree with the official selection of Marcos Alonso at left-back, although he admitted: “There hasn’t been an absolute stand-out left-back.”

Neville instead chooses Andrew Robertson, the man he told Liverpool to sell in December before acknowledging his mistake.

“Robertson, earlier in the season, I made a comment that I didn’t think he was good enough. I wasn’t talking about how he was going forward but more his defensive work,” Neville explained. “However, he’s done a lot better than I ever imagined. I have to hold my hands up and then you bring him into consideration with Alonso. I’m going to go with Robertson, because ultimately Liverpool are having a fantastic season. I’m not entirely convinced by the season Alonso’s had.”

“I felt I had to get in Sterling or Sane,” said Neville, adding that “the big moments” persuaded him to go for the former. He describes Firmino as “the catalyst” for Liverpool.