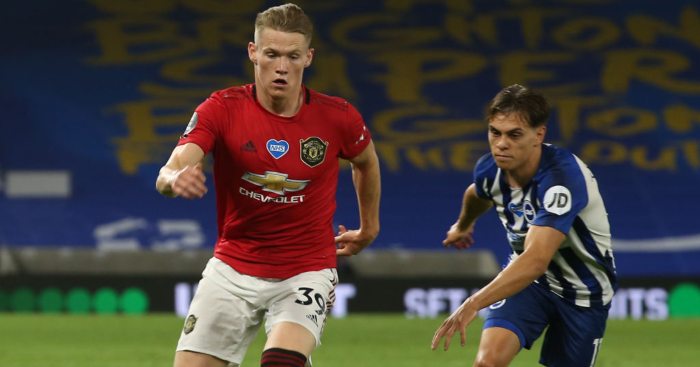 The blossoming partnership between Bruno Fernandes and Paul Pogba coupled with the improved form of Fred and Nemanja Matic could mean that minutes in midfield are harder to come by.

McTominay has proven himself to Solskjaer over the last year as Man Utd had previously struggled for form and Neville reckons the Scotland international has the attributes to become a defender.

MAILBOX: It’s Rashford who should be worried about signings…

“Nemanja Matic does look resurrected in that red shirt,” Neville said on Sky Sports commentary after McTominay came on in the Red Devils’ 3-0 win over Brighton.

“There was a period where he looked exposed in that midfield but with Fred, McTominay and now Pogba and Fernandes, he looks so much more comfortable again.

“I just watch McTominay play and I think of all that competition in midfield and I wonder whether he could be used as a centre-back. He’s got the aggression and he’s got the speed. His understanding of the game is pretty good and he’s still young.”

Meanwhile, Bruno Fernandes, who scored two of United’s three goals in their victory over Brighton at the AMEX Stadium on Tuesday night, thinks Man Utd can make the top four.

“The most important thing is the three points, but we played well, and the result was good,” Fernandes said.

“We didn’t concede again which is important. David de Gea made two or three amazing saves, we are very happy.

“We knew that we needed to push forwards and to try and score from minute one. I was lucky with the first goal and the second goal was amazing, an amazing pass from Mason.

“We are fighting for a place in the Champions League and we know we can achieve this.

“I don’t want to talk too much about me and Paul Pogba, we are happy to play together but I am happy to play with everyone. We can combine together, we have qualities, but we know that we have team-mates who can do well.”