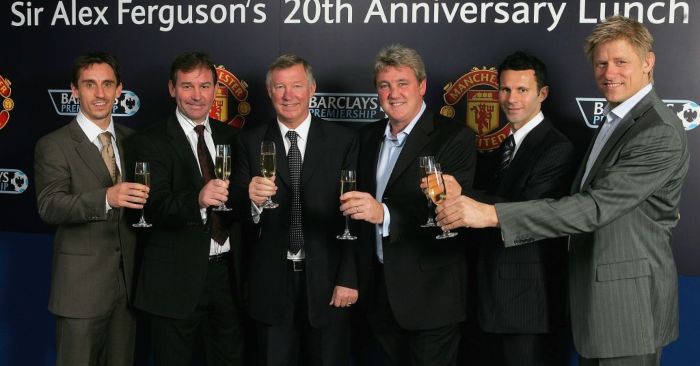 Gary Neville has named the Manchester United teammate who was “hardest” to him, as well as “the one that helped me the most”.

Neville made his Man Utd debut in September 1992, eventually retiring in 2011 after having “conned” everyone in his final season.

But he only established himself in the United first team during the 1994/95 season after an injury to first-choice right-back Paul Parker.

Even then, the teenager was often benched for Denis Irwin, with Lee Sharpe dropping back to fill in on the left in the Irish great‘s place as Neville acclimatised to the challenge.

It was during that difficult transition period that he found himself on the end of some “brutal” treatment from goalkeeper Peter Schmeichel, with centre-half Steve Bruce helping him through.

“The one that was hardest to me was Schmeichel, he was brutal to me in that first year or two, but the one that helped me the most was Steve Bruce,” he told Sky Sports.

“Steve Bruce taught me that during my early years. He is the one I’d say who had the biggest influence on me.

“Schmeichel told me I wasn’t good enough to replace Paul Parker, that I was nowhere near as good as Paul Parker, and he was right. He was a brilliant defender.

“He saw me as a risk and I was a risk, I suppose, in some ways. I saw it as being brutal but it did toughen me up eventually.”