Home All The News Neville claims Prem must be ’embarrassed’; heads ‘Manifesto for Change’

"I want the best Premier League in the world, but I want sustainable football clubs." 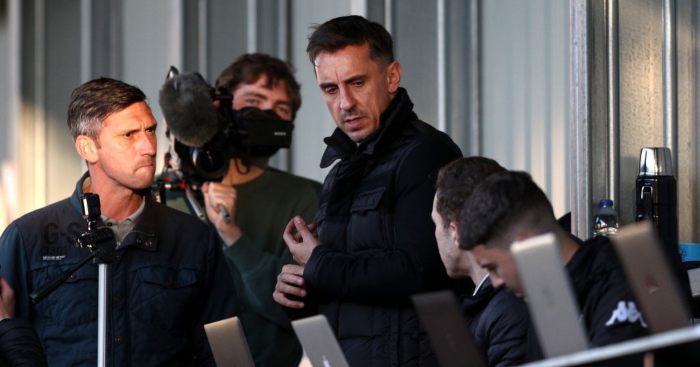 Gary Neville thinks the Premier League member clubs must be “embarrassed” that it took them so long to sort a rescue package for the EFL and is calling for independent regulation of the game.

Sky Sports outlines the manifesto which has determined that the “national game operates within a model that is fundamentally flawed” with the “dysfunctional and damaging existing structure” needing change.

On their plans, Neville said: “The principle is that we don’t trust that football can govern itself and create the fairest deal for all, whether that’s the Premier League, EFL clubs, non-League clubs or the fans.

“It has been proven over this past six months that football has struggled to bring everyone together and proven to be incapable over a 25-30 year period of transforming the money in the game into something that works for everybody.

“I want the best Premier League in the world, but I want sustainable football clubs.

“There is enough money in the game to be able to have an elite Premier League, a sustainable and competitive EFL, money passed down to non-League and grassroots and where fans can get a fair deal.

“That’s where an independent regulator, with that spirit at the heart of it, can come in and say ‘that’s not fair’.

“I know we’ve got a big task in front of us, but we’ve got a group of people who love football and want the best for football.”

Liverpool and Manchester United, along with EFL chairman Rick Parry, had been behind the Project Big Picture plans which emerged at the weekend.

But they were knocked back at a clubs meeting held on Wednesday, as the plans were ‘unanimously’ rejected by Premier League clubs.

However, the Premier League sides did agree to a ‘rescue package’ for EFL clubs – but Neville thinks it has come embarrassingly late.

“I don’t want to take all the money off the Premier League,” Neville said. “I want the best players and the best managers but they’ve spent £1.2 billion in a pandemic and it took six months for them to pass £50m down to the EFL.

“I would be embarrassed to be part of the Premier League as a member if it had taken me six months to sort out a rescue package for the EFL that need it when they’re sending that level of money on transfers. It’s not good enough.”