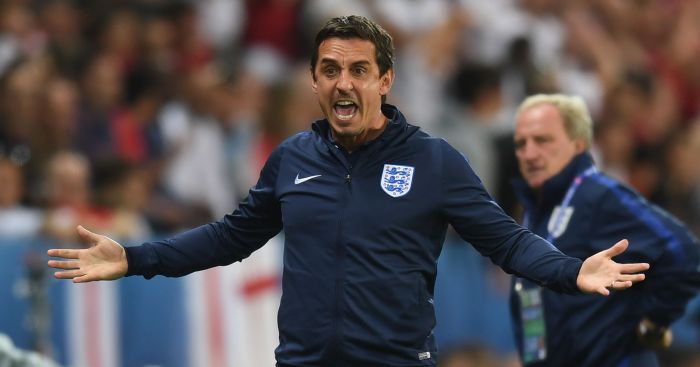 Neville has been announced as one of the ‘lead pundits’ for ITV ahead of the tournament in Russia next summer.

The deal for Neville to join ITV has been made in conjunction with Sky Sports, where he will remain their chief pundit.

Neville ‘will be a key part of the channel’s studio team’ for the tournament, alongside Ryan Giggs, Ian Wright and Lee Dixon.

ITV will announce their punditry team in full ahead of the competition.

Very Kind if you Ed ! https://t.co/RDcL2ZggyD

“I’m delighted to join the team at ITV for next summer’s World Cup coverage and thank Sky for also making it possible. I’ll look forward to joining up with them in Russia next June,” Neville said.

Niall Sloane, ITV Director of Sport, added: “Gary Neville is one of the most respected and valued voices in football broadcasting.

“His experience, insight and understanding of both football and footballers will greatly enrich our coverage of next year’s World Cup.”