Home F365 Features The Nevilles’ book ‘For Club and Country’: A belated review 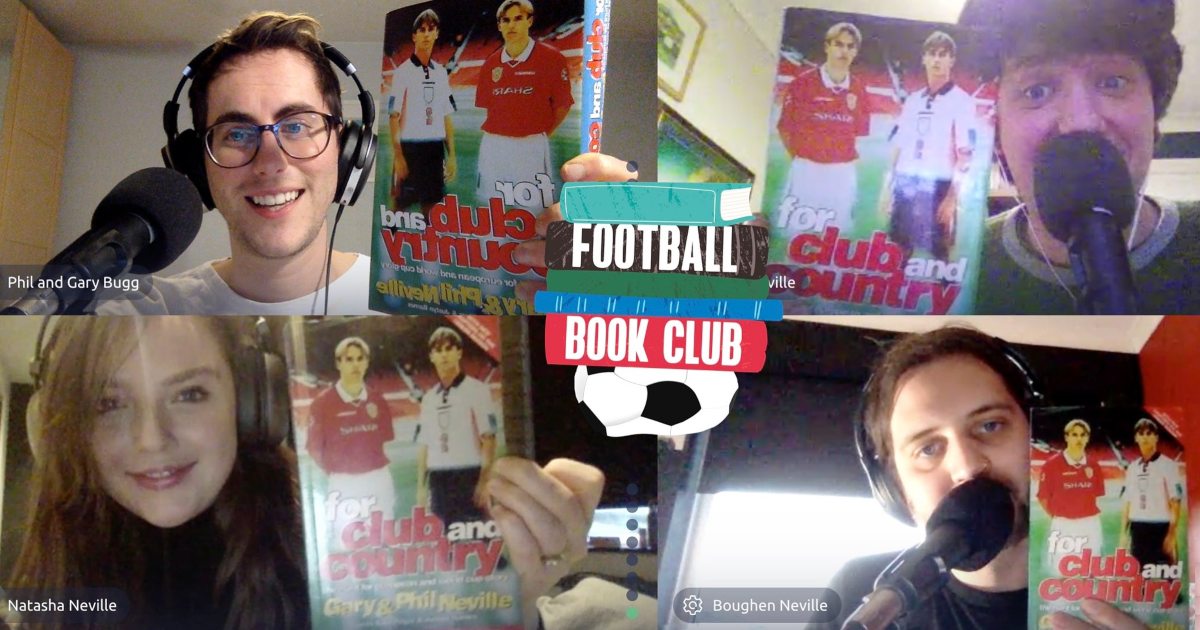 Twenty-three years ago, Phil and Gary Neville sat down and wrote their diary ‘For Club and Country’. We’re not sure anyone read it then. But you better believe we’re reading it now.

Here’s what the Football Book Club podcast thought of it…

All great diary writers. Except where Bridget Jones was writing about her sex life, Gary and Phil wrote about something much more exciting – the 1997/98 Premiership season. Plus Gary’s ongoing barn conversion.

Every week on Football Book Club, we try to track down some of the most obscure football books ever written, and this might be the best yet.

A quick Google search comes up with surprisingly few results and just one, measly review on Amazon. Meaning there’s a genuine chance this may be the only book in history to have more authors than people who’ve read it.

That is until we came along anyway.

OK, you’ve had a long day, now time to unwind with our BRAND NEW episode on ‘For Club and Country’ by Gary and Phil Neville ⚽️

A journey back to 1997, courtesy of G&P, including this, the time Sir Alex was dragged along to Spiceworld The Movie

Upon reading it, we were whisked back to the late 90s, courtesy of Gary and Phil. Cool Britannia, Spice Girls and judging a local talent contest with Les Battersby, as the brothers take it in turns to write entries about the title fight, France ’98 and bumping into Henning Berg in the toilet.

It’s a forgotten classic – Adrian Mole but with loads more references to Michael Clegg – and at one point, it’s even quite emotional. Here’s what we learned from it, in this, the second-ever recorded review of ‘For Club and Country’.

Sir Alex Ferguson was dragged along to watch Spiceworld: The Movie
It’s very hard to picture Alex Ferguson in a cinema, stonily faced watching The Spice Girls jump Tower Bridge in a London bus. But, apparently, he did, and was joined at the film’s premiere by the Nevilles, Ryan Giggs, Peter Schmeichel and Jordi Cruyff.

That’s the greatest manager in recent history and the son of Johan Cruyff, sat in the dark watching Scary Spice talk to aliens. Thank God for the 90s.

Presumably it all had something to do with keeping David Beckham happy. But, either way, Phil wasn’t too impressed.

‘I got a little bored, but the little kids really enjoyed it and that’s probably the audience they’re aiming at,’ mused Phil.

In other news, please sign our petition to replace Mark Kermode with Phil Neville.

And on the subject of Becks…

Gary absolutely loves David Beckham
Probably not the most enlightening news, but strait-laced Gary and naughty boy David’s relationship is one of the highlights of the book.

When rooming together on international duty in Georgia, David spends one and a half grand (!) on telephone calls to Victoria and poor Gary is made to stump up half of it. He doesn’t say a thing.

Another time, David tries to convince Gary to buy an eight grand watch, but Gary doesn’t want to get told off for wasting his money, so instead tells David he’d rather go round his house and play with David’s new puppies.

There’s a distinct ‘year 8 hangs out with the cooler boy in the year above’ vibe, but thankfully, Gary never lets David leave him astray.

Beckham’s dogs, by the way, are called Snoop and Puffy ‘named after David’s favourite rappers’, as Gary reveals. He and Phil aren’t allowed to listen to them.

Being a footballer in the 90s was far less glamorous than we imagined
As we’ve already mentioned, alongside the drama of a title fight with Arsenal (yep, Arsenal competing for a title, we told you this book was a  throwback), the main sub-plot in the book consists of Gary Neville’s nightmare barn conversion.

First the people of Bury are angry he’s taking away valuable public picnic space, then there’s a planning permission complaint about a wall, then someone tries to sell him a kitchen for ten grand over the asking price.

It’s high-octane stuff. Rivalled only by the book’s semi-regular updates on Gary’s upset stomach. But most revealing is the sheer number of naff events the brothers get roped into. Especially poor Phil who, in the space of a few months, has to…

– Open a garage in Stratford.

– Judge the ‘North West Talent Show at Willow Salford Rugby League Club’ alongside a Hollyoaks cast member and both the Battersbys off Coronation Street.

And, in the most depressing entry in the book.

– Open the summer fair at a nearby primary school, while Gary’s about to play Tunisia at France ’98

However, the young Nevilles come across as genuinely lovely lads throughout and, in the latter chapters, honestly almost broke our hearts as Gary described his heartache when Phil didn’t make the World Cup squad.

The emotional rollercoaster for the brothers is brilliantly captured as Glenn Hoddle brings the players in one by one, X Factor judges’ houses style, ending in dismay for one Neville and muted jubilation for the other.

Overall, the whole book is akin to jumping in a time machine back to the 90s – if you landed slap-bang in Nicky Butt’s house. And, yes, it might not be a great literary masterpiece, but in many ways, it’s more than that. Sure, you could read Dostoevsky, but if you were an England fan in the nineties and love planning disputes, this is far more enjoyable.

And for more Neville insight, you can listen to the full episode here

To listen to The Football Book Club podcast discuss the Nevilles’ book, you can subscribe to the podcast on Apple, Spotify and on all other podcast platforms, with a new episode released every Monday. They can also be found on Twitter, Instagram and Facebook.