Home F365 Features Genesis of a goal: Gerrard, Kaka and a moment to rival the slip 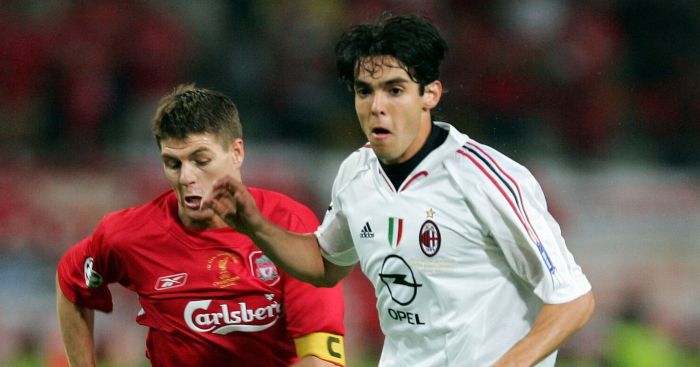 Consider your favourite goal. You can picture the finish and the assist, perhaps even a pass or two beforehand. Maybe you can see the expressions on the players’ faces, or of those on the touchline or in the crowd. A line or two of commentary might stick in the memory.

But what about the overlooked moments leading up to glory? The passes, tackles, mistakes and decisions made and missed? The seemingly meaningless actions that precipitated the celebration? What about the forgotten foreplay in the build-up to an unforgettable climax?

What about the genesis of a great goal?

“Look at that from Kaka,” implored Clive Tyldesley. “And what a pass, too, for Crespo. And what a goal that is. What a goal that is,” he continued, the simplicity of the words perfectly capturing an elaborate and flowing move. Before the ball had even caressed the net, Andy Townsend let out the second of two audible groans, both a mixture of pity for Liverpool and astonishment at Milan. Then Tyldesley summarised the general consensus.

“Nobody can live with this.”

It was a sentiment later echoed by Steven Gerrard in his 2007 autobiography, published two years after that famous night in Istanbul, and two months after that remarkable result had been reversed in Athens.

‘I looked at my team-mates,’ he recalled. ‘Stunned and dazed, we couldn’t get near Milan. Never had I faced such a good side.’ He described it as ‘the half from hell’ as his side found themselves ‘in the grip of a worsening nightmare’.

For those without an affinity towards Liverpool, Gerrard will always be remembered for one thing. The trophies, the individual honours, the gladiatorial performances and the lifetime of phenomenal service will always rank below that Sunday afternoon at Anfield in April 2014 for some.

Rival supporters still sing about it more than three years after his retirement. They continue to goad Liverpool – the world and European champions and runaway Premier League leaders – even with Gerrard working in another capacity in a different country. It might still receive a few renditions even if Jordan Henderson exorcises those particular demons in May.

It is ludicrously harsh, of course. Gerrard earned more than enough credit and dragged Liverpool single-handedly to enough glory to deserve a greater reputation, a fonder memory. Yet the sight of him miscontrolling a simple pass, slipping and desperately clawing at Demba Ba’s feet has come to define him.

That is his legacy, and perhaps a fitting one. He was the warrior who led his charges into battle, tripped over his own feet and landed on his sword. The greatest player never to win the Premier League scuppered his own best chance.

Few remember that a similar script had been written nine years prior before a hasty and miraculous re-draft.

Carlo Ancelotti’s first meeting with Liverpool did not even vaguely resemble the last. His side entered the 2005 Champions League final as overwhelming favourites, a team littered with enviable brilliance instead of Morgan Schneiderlin and Theo Walcott. A defence of Cafu, Jaap Stam, Alessandro Nesta and Paolo Maldini was borderline unfair, a midfield of Andrea Pirlo, Gennaro Gatusso, Clarence Seedorf and Kaka so perfectly rounded that it was roughly 3.14159 times better than anything anyone else could offer, and Hernan Crespo and Andriy Shevchenko were neither messy eaters nor feeding off scraps. As a whole, Milan were sensational.

Jamie Carragher summed it up two days before the final in what was retrospectively an awfully brave admission. “No disrespect to the squad we have got now,” he said, “but it is obvious we are not as strong as we were when we won the UEFA Cup in 2001.”

That seemed generous with 40 minutes gone, Milan two goals ahead and Liverpool having already lost surprise pick Kewell to injury. Those issues would be compounded further shortly before half-time.

The perpetrator was no secret. ‘Kaka was a great player, I knew that. But not until I spent that half running around after him, chasing his shadow, did I appreciate how quick he was in possession. Never in my career had I encountered anyone as fast with the ball at their feet. Kaka was lightning.’

Those who watched the game live will remember aspects of Milan’s third goal: Kaka’s awe-inspiring pass, Carragher’s despairing lunge, Crespo’s glorious dink, Dudek’s helplessness. What few will recollect is how it came about – how Liverpool were ruthlessly sliced apart by one dummy and one pass from within Milan’s own half.

A quick Serginho throw-in was hijacked by Alonso and directed to Garcia. He played the ball back to Gerrard and immediately embarked on an unmanned run down the right-hand side, but Riise knew his own limitations and opted against the risk. He returned possession to Gerrard in the centre, the captain taking one touch before using the outside of his boot, under no pressure, to play the ball to no-one in particular. It was a terrible pass indicative of a team running out of ideas.

Pirlo’s interception was entirely on-brand: a pass to Cafu which was given straight back to the midfielder who, in an instant, turned and laid the ball into Kaka’s path.

He promptly ‘conjured up more magic’. Kaka did not control the ball, instead letting it run through his legs as he glided past one leggy challenger in midfield and released Crespo before even crossing the halfway line. Within five seconds, Gerrard had given away possession and been completely embarrassed in his attempts to retrieve it. The game was over.

Or at least it should have been. Unlike his capitulation on a similarly grand stage nine years later, Gerrard fully atoned for his mistake. He scored Liverpool’s first goal, watched Vladimir Smicer plunder the second and won the penalty for a third in a whirlwind six-minute spell, spending much of the game at right-back and ending it as man of the match.

That is the hero that should be remembered, not the one who followed his error against Chelsea by taking eight second-half shots, seven of which were from outside the area.

Of course, the morbid hilarity then was provided by Gerrard’s own words. “This does not fucking slip now,” he screamed twice as his teammates gathered for a post-match huddle after beating Manchester City at Anfield two weeks prior. Even with a victory at Norwich sandwiched in between, the visit of Chelsea gave new meaning to the expression, ‘do as I say, not as I do’.

Gerrard will be thankful that history is written by the victors. He helped ensure that he would not be characterised by a similar quote against Milan.

‘We were penned in, terrorised by Kaka’s breaks,’ he remembered as the two-goal deficit threatened to engulf Liverpool 15 years ago. ‘This unbelievable Brazilian ran the show, finding spaces everywhere, firing in these killer balls.

He proceeded to give the ball away unnecessarily and rush in to unsuccessfully recover it. It was hardly ‘warning others about a banana peel you are about to step on’ levels of irony, but it was prescient nonetheless.

And it would have been Gerrard’s memento from the greatest opportunity of his career, played for eternity to the soundtrack of that Townsend gasp. His own determination, breathtaking stubbornness and leadership consigned the memory of both that and one of the greatest Champions League final goals to the annals of a forgotten history.

genesis of a goal steven gerrard