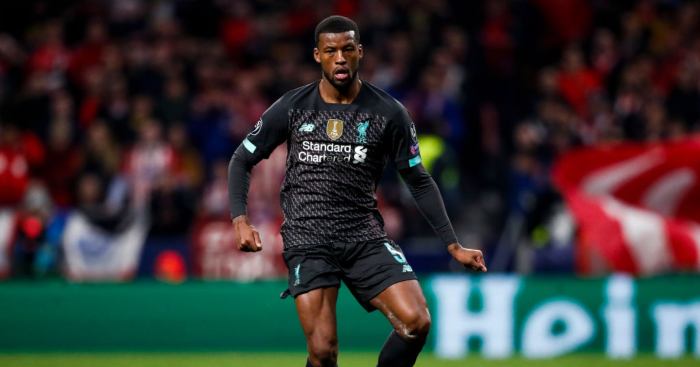 Georginio Wijnaldum has revealed that Liverpool’s players are not afraid of being brutally honest with each other as they look to keep their outstanding form going.

Liverpool’s 1-0 defeat to Atletico Madrid on Tuesday night was only their third of a remarkable season – the second if you discount the under-23s being knocked out of the League Cup – and they will be targeting a record-equalling 18th straight Premier League win when they face West Ham on Monday night.

Not everything is perfect, however, and Wijnaldum says the family atmosphere within the club allows the players to speak freely to one another when the need arises.

“We’ve played together a few years already, so we also know each other as people,” Wijnaldum said on the club’s website. “We just have a group that is like friends. With each other, it feels like family.

“Maybe sometimes we have to be fair with each other and say something which the other person might not like.

“But that helps us also to be a better team because we all expect from each other that the person you play with is giving 100 per cent. We, as a team, have to make sure he does it.

“We’re just honest with each other and try to help each other out to do as good as possible.”

Liverpool will have to wait until the return leg at Anfield on March 11 to right the wrongs of Tuesday’s loss to Atletico, but Jurgen Klopp has already said he expects to see a reaction from his players when they face David Moyes’ Hammers on Monday.

Few would bet against them re-establishing their 22-point advantage at the top of the Premier League, but Wijnaldum says the players do not get ahead of themselves.

“Think of one game at a time, try to give everything every game and at the end you will see what will happen,” he said. “We don’t really think about results and those things.

“We just think about the game and try to give everything we have and do as good as possible so we have the biggest chance to win the game.

“Until now, it went quite well, really well, so we hope we can continue this run until the end.”

It is less than a month since Liverpool won 2-0 away to West Ham in the reverse fixture. Wijnaldum admitted Liverpool had found West Ham a tough nut to crack as they defended in numbers.

“It’s going to be a difficult game,” he said. “When we played away it was already a difficult game – they dropped deep, they made it difficult for us to play our football. I think they’re going to try to do that again.

“Every situation is different, we just have to deal with the situation we will be in at that moment.”