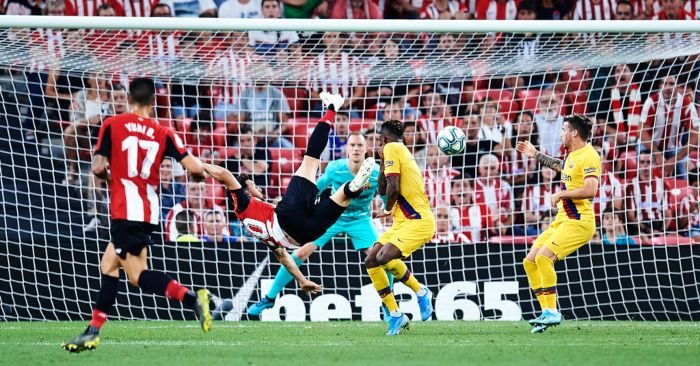 It may have been a slightly shorter weekend of football than La Liga boss Javier Tebas would have liked, but the Spanish domestic season is back with a bang.

La Liga’s raging battle with the Spanish Football Federation over the right to have matches on a Monday night has dominated the domestic agenda in Spain for the last few weeks, but thankfully the actual football has returned to put us all out of our misery.

Not that most of it could be seen live in the UK, as a rights package is still yet to be agreed to show La Liga matches. Thankfully ITV4 will be showing a game from each of the first three weeks (plus a highlights show), but the long-term visibility of the Spanish game in the UK remains up in the air.

ITV4 chose to broadcast Friday night’s curtain-raiser between Athletic Club and Barcelona in Bilbao, and those who tuned in were treated to an absolute bombazo.

Messi-less Barcelona dominated possession as always, but struggled for chances, while Athletic were clearly buoyed by the occasion in a packed and boisterous San Mamés. Luis Suárez had the best chance of the game, smashing against the post after a disastrous pass back to the keeper from Unai López, but went off injured shortly afterwards.

As the final whistle approached, one couldn’t help but feel that Barça would find last-minute salvation, as they so often do.

But then Athletic made a change. Veteran striker Aritz Aduriz, who recently announced that this season will be his last, put his Werther’s Originals down and clambered off the bench to replace speedster Iñaki Williams.

With only his second touch, the 38-year-old met Ander Capa’s cross with the most outrageous overhead kick, which bounced past Marc-André ter Stegen and into the net, provoking euphoric celebrations among the fans, and giving former Athletic boss Ernesto Valverde a nightmare start to the season.

Barça’s defeat gave Real Madrid the chance to gain a very early advantage over their mortal enemies, and they grabbed the opportunity with both hands in a comfortable 3-1 win over Celta at Balaídos. None of Madrid’s new signings started the game, and there was even a surprise appearance for Gareth Bale, who put in a good performance and produced a fine assist for Karim Benzema’s opening goal.

After Luka Modrić was harshly sent off by VAR for fouling Arsenal legend Denis Suárez, Toni Kroos took the game away from the Galician side with perfectly executed rocket of a shot from 30 yards. Lucas Vázquez’s smart finish after 80 minutes put the result beyond doubt, before 18-year-old Iker Losada scored a late consolation for Celta on his professional debut.

And so over to Atlético, who faced neighbours Getafe at the Wanda in a game of few chances but plenty of incident. Atleti took the lead after 23 minutes as the impressive debutant Kieran ‘Trips’ Trippier invoked the spirit of Russia 2018 with an inch-perfect cross onto the head of Álvaro Morata.

Before the first half was over, both sides found themselves a man light. First, Getafe’s star of last season Jorge Molina had his yellow card upgraded to a red by VAR for a stamp on Thomas Partey. Then, Atlético’s Renan Lodi evened things up with two yellows in the space of a minute on his debut for the club.

Early in the second half, Atleti’s €126m signing João Félix showed his incredible talent with a magnificent run from the halfway line, before being brought down in the box by Raúl García. The resulting penalty was taken by Morata, but his powerful shot was well saved by Getafe’s David Soria.

Atleti’s fans were given a scare when Félix hobbled off midway through the second half, but manager Diego Simeone later revealed that he was merely suffering from a touch of cramp.

Getafe’s Ángel almost grabbed a late equaliser with a stunning shot from distance, but the ball smacked off the crossbar and Atleti held on for a 1-0 win.

Outside the ‘Big Three’, Valencia threw away two points at home to Real Sociedad in bizarre circumstances. Having entered injury time with a 1-0 lead after Kevin Gameiro’s second-half goal, Valencia were awarded the chance to double their lead from the spot after Denis Cheryshev was brought down in the area. Gameiro stepped up to take it, but his shot flew high and wide of the target.

The game continued for a further five minutes, enough time for Willian José’s free-kick to be handled in the wall by Francis Coquelin, for the Frenchman to be sent off and for Mikel Oyarzabal to score the resulting penalty and steal a point for La Real in the 101st minute.

Arguably the game of the weekend came from La Cerámica; six goals were scored in the second half alone as Villarreal drew 4-4 with newly-promoted Granada.

There were contrasting fortunes for both Seville sides as they took the first steps into their respective new eras. Julen Lopetegui’s Sevilla produced an impressive away performance to beat Espanyol 2-0, but Betis – who had goalkeeper Joel Robles sent off after eight minutes – couldn’t hold on for a point at home to Real Valladolid, who picked up the three points thanks to Óscar Plano’s late winner.

To complete the weekend’s action, Levante were perhaps a little unlucky to lose 1-0 at Alavés, but Newcastle fans would agree that if you let Joselu score against you, you probably deserve to lose.

Hero of the week – Old man Aritz Aduriz with his geriatric acrobatics.

Villain of the week – Valencia’s Kevin Gameiro and Francis Coquelin share the award for combining to somehow throw away an important victory for their side.

Performance of the week – It has to be Athletic Club for their heroic win over the reigning champions.

Goal of the week – Kroos runs him close, but how could it be anyone other than Aduriz?