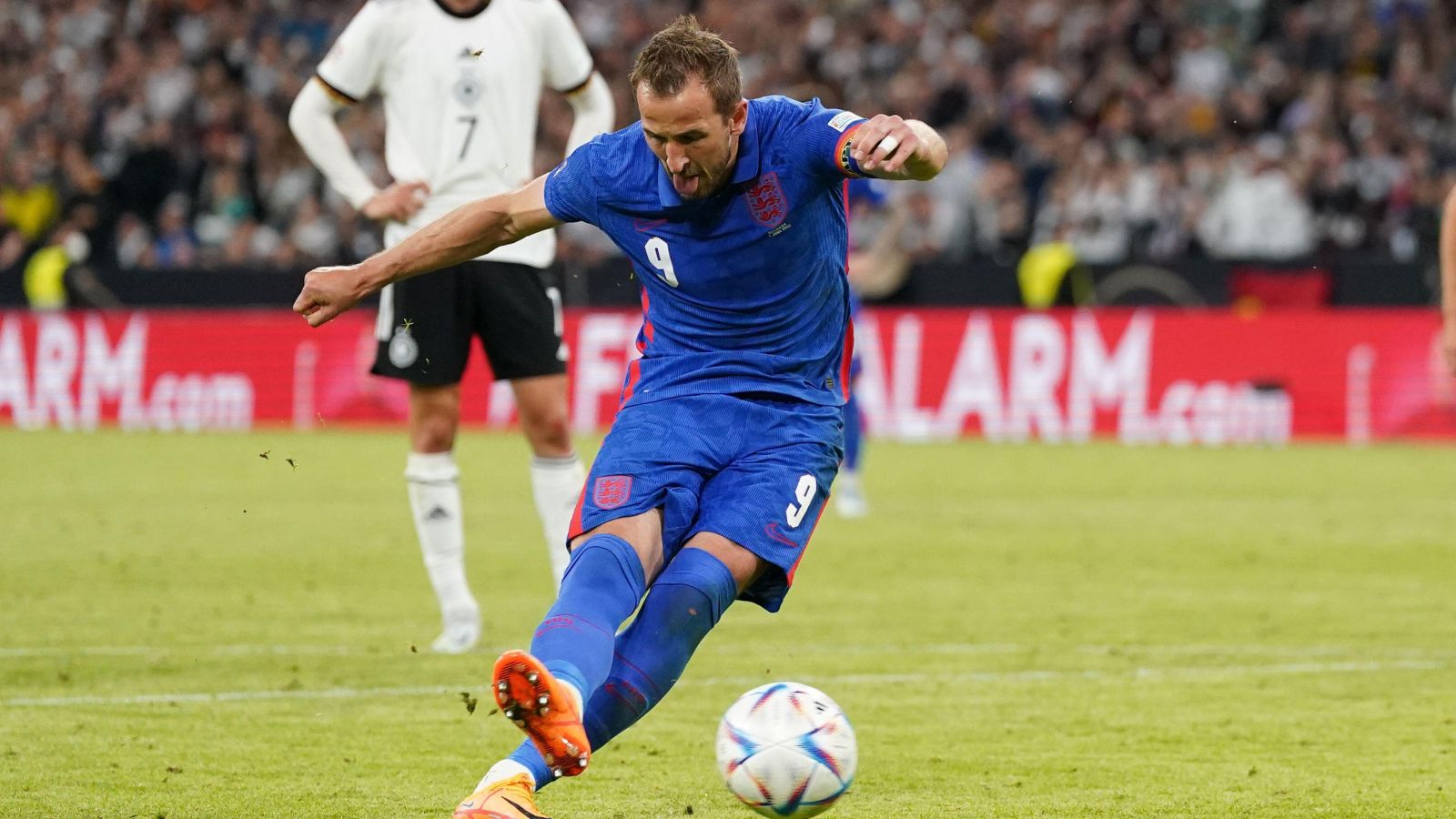 Harry Kane scored his 50th international goal to salvage a point for England against Germany in the UEFA Nations League.

England arrived in Munich wanting to bounce back from their loss to Hungary over the weekend.

The Three Lions looked set for defeat when Jonas Hoffman fired the hosts ahead, but Kane struck for Gareth Southgate’s side late on.

Molineux matches against Euro 2020 final foes Italy and Hungary follow after a night that ended on a high – and thankfully seemed to go without fan trouble inside the Allianz Arena.

The official away section of 3,466 were joined by other England fans dotted around the Allianz Arena, where Germany impressed in the first half. Thomas Muller and Hofmann saw goals ruled out, while former England Under-21s international Jamal Musiala showed his class.

Bukayo Saka twice threatened in stoppage time as England showed flickers of life, but Germany took the lead in the 51st minute when Joshua Kimmich put through Hofmann to all too easily beat Jordan Pickford.

England’s goalkeeper ensured Muller did not extend the hosts’ lead and Manuel Neuer shone at the other end, but he would be beaten from the spot in the 88th minute.

Gave it everything until the very end. 💪 pic.twitter.com/ywC6qBewbA

Referee Carlos Del Cerro Grande pointed to the spot after watching back Nico Schlotterbeck’s challenge on Kane, who kept his cool to send the goalkeeper the wrong way and edge closer to Wayne Rooney record 53-goal haul.

There was a moment of solidarity before kick-off, where Germany joined the visitors in taking the knee after the anti-racism stance was booed in Hungary.

The home side flew out of the blocks and would have opened the scoring inside three minutes had Kyle Walker not stopped Muller directing home a flicked-on corner at the far post.

Kai Havertz had already got a shot on goal by that point and Kane followed suit as England looked to get a foothold on proceedings, before Kalvin Phillips’ injury led to an early rejig.

The midfielder tried to run off the issue but admitted defeat in the 13th minute – a moment Germany cheekily tried to capitalise on as Muller clipped home from a quickly taken throw-in.

Those celebrations were cut short as play had stopped so Jude Bellingham could be introduced – and the hosts were frustrated again in the 23rd minute.

Hofmann ran from just inside the England half to meet a hopeful long ball forward and kept his cool to beat Pickford, only to see the flag raised for offside – a decision ratified by the VAR.

Southgate’s side were looking unsteady at the back and were struggled to get grips on confident Musiala, whose skill and directness was threatening.

But England had grown as an attacking threat and were beginning to pose more problems themselves.

Kane should have done better than lashing over when Neuer flapped at a corner, with Germany’s number one producing a fine save to deny Saka’s snapshot from an acute angle in stoppage time.

There were eight minutes of additional time and Saka again went close when he thumped a 20-yard effort just wide.

Any England goal would have been against the run of play and Germany took the lead six minutes after the break.

Harry Maguire followed the ball during a period of patient German passing, with Joshua Kimmich exploiting the gap he left to slip in Hofmann, who lashed past Pickford. The England goalkeeper should have done better.

Mason Mount saw a 25-yard attempt to immediately restore parity denied by Neuer, but Germany were largely in control and Pickford was forced into a superb reaction save to prevent Muller volleying home.

Jack Grealish was introduced as England searched for a leveller and he nearly provided it in the 76th minute, sending in a low ball that Kane stretched to turn on target – but Neuer spread himself well to save.

Substitute Jarrod Bowen’s cross was nearly converted as the clock wound down, with Kane going down in the box under pressure from Schlotterbeck.

Penalty claims appeared to fall on deaf ears as Germany countered, but for the referee was advised to check the pitchside monitor by the VAR.

Del Cerro Grande pointed to the spot and Kane kept his cool to beat Neuer and delight the England fans in the 88th minute.