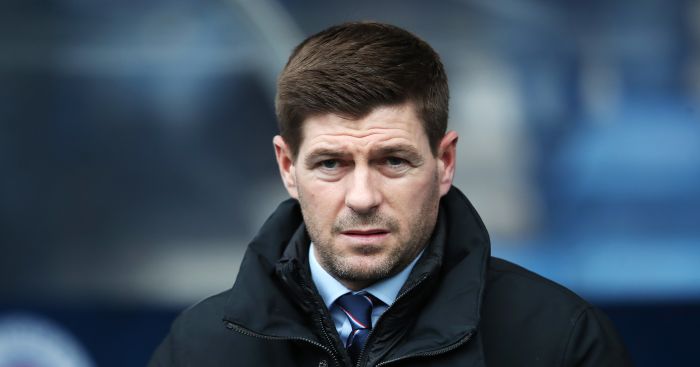 Steven Gerrard should have “got stuck into” his Rangers “bottle merchants” after losing to Aberdeen earlier this week, according to Chris Sutton.

Rangers lost 2-0 to Aberdeen in a Scottish Cup quarter-final replay at Ibrox on Tuesday to virtually end their hopes of winning a trophy this season.

Gerrard’s first campaign has shown signs of promise but they are eight points behind Scottish Premiership leaders Celtic and were knocked out of the Europa League at the group stages.

Sutton has questioned why Gerrard didn’t lay into his players after the Aberdeen defeat and brand them “a bunch of bottle merchants”.

‘Steven Gerrard said he came to Glasgow to win trophies and following their replay defeat that isn’t going to happen unless Celtic collapse in the league,’ he wrote in his column for the Daily Record.

‘Indeed, unless Rangers can do the impossible and snatch the title then this season – apart from qualifying for the Europa League – has to go down as another to forget for such a big club.

‘My team, my responsibility, said Gerrard after the humiliation against Aberdeen.

‘The Ibrox manager does front up and says it like it is so it was a surprise to hear him admit he was too angry to speak to the players after the 2-0 loss.

‘Maybe the better option would have been to get stuck into a group of players he has trusted and shown faith in, telling them what a bunch of bottle merchants they were once again when it really mattered.

‘This is Gerrard’s team. I’m not so sure Walter Smith would have let his players away with such a poor display when the heat was on.

‘Rangers were like lambs to the slaughter when it mattered. And it makes this summer very interesting for them.

‘Dave King backed his manager big with a huge overhaul. But the end of this season may well see Alfredo Morelos leave and, with Jermain Defoe benchwarming in the main, why would he want to stay?

‘Chuck in the possible loss of loan players Ryan Kent and Joe Worrall and there seems to be plenty of work to do. Jordan Jones comes in but is he an upgrade on Kent?

‘Motherwell’s Jake Hastie looks a good prospect but will he take Rangers to the next level as quickly as they want?

‘Then there is the question of whether Rangers have the money to go again after heavily supporting their manager in January.

‘King has backed Gerrard so far, of that there is no doubt. But they may have to cash in on saleable assets like Morelos and James Tavernier to go again.

‘And with that lies the risk of whether they can be replaced with as good, if not better, quality.’