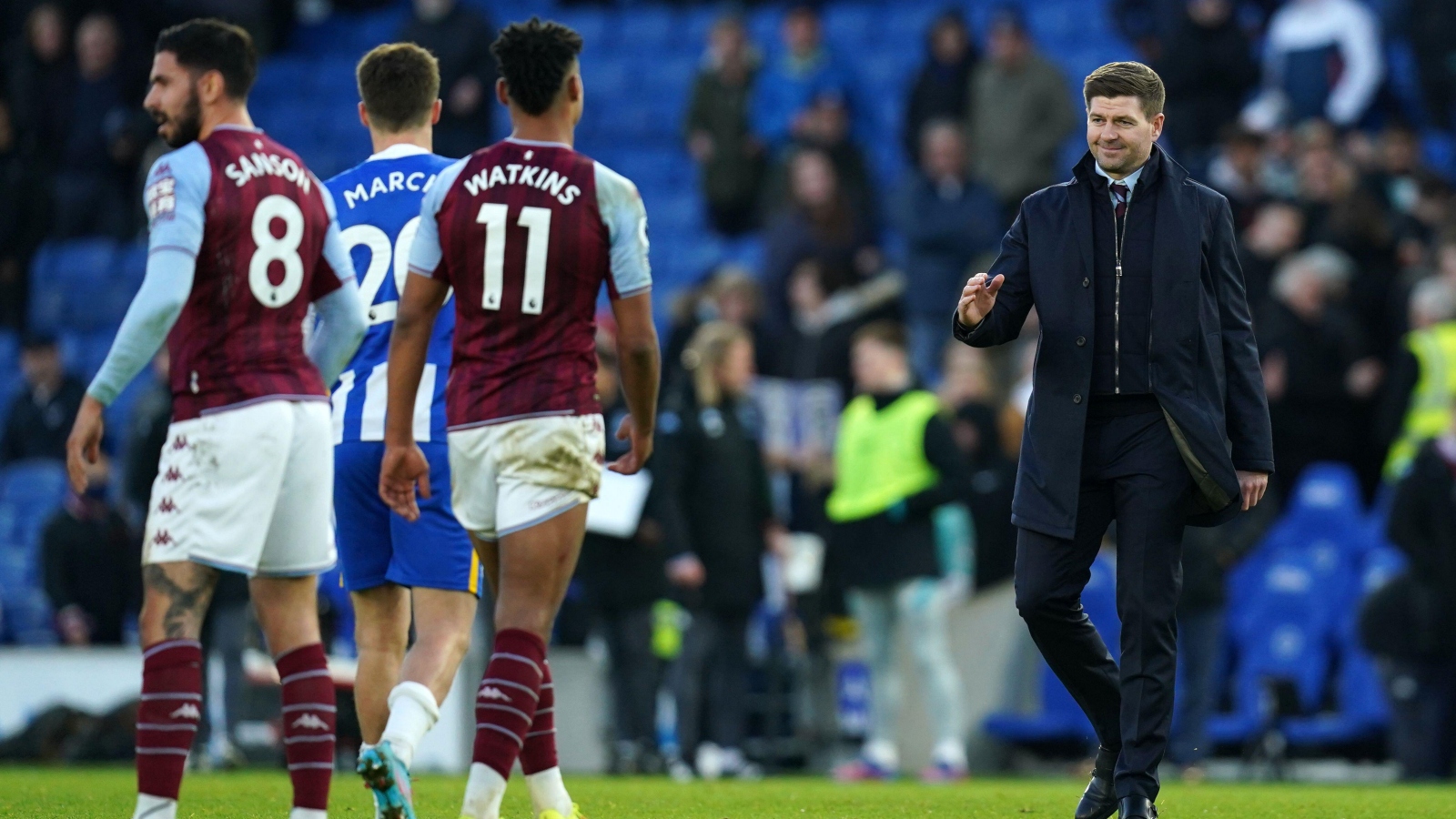 Steven Gerrard and Ollie Watkins reportedly ‘do not see eye-to-eye’ with one another, meaning Aston Villa are ‘willing’ to sell the striker.

He hit the ground running thanks to a good old-fashioned case of a ‘new manager bounce’.

Villa won four of their first six games with Gerrard at the helm, with their only defeats coming against Manchester City and Liverpool.

As you may have seen on social media this week, Gerrard’s record as Villa boss is the same as Gary Neville’s at Valencia.

Neville has been constantly ridiculed for his time in Spain and has admitted that he has now been put off management for life.

So, that is not a great look for Gerrard, whose side lost 2-0 to newly promoted Bournemouth in their opening fixture of the new season.

The 42-year-old has been heavily backed in the transfer market since replacing Dean Smith at Villa Park.

Villa have spent close to £50million this summer, most notably bringing in Diego Carlos from Sevilla and Philippe Coutinho from Barcelona.

Furthermore, the Villans forked out £27m to sign Lucas Digne from Everton in January.

With a bit of pressure mounting on Gerrard for the first time in his managerial career, he has also been criticised for stripping Tyrone Mings of the captaincy and dropping him from his starting XI.

Another surprise decision made by Gerrard was to leave Watkins out of his starting XI for Saturday’s trip to Bournemouth.

The England striker was introduced in the 66th minute with the score at 1-0, but could not have the impact he or his head coach had wished for.

There could be more to Gerrard dropping Watkins to the bench, with Football Insider reporting that the pair ‘do not see eye-to-eye’.

It appears that the club’s hierarchy has sided with the head coach in this situation.

Villa are believed to be ‘willing’ to sell the 26-year-old before the transfer window slams shut.

Gerrard and Watkins have had a ‘bust-up’ amidst their ‘tense relationship’.

The Villans were reportedly keen on signing a new ‘A-list striker’ to upgrade on Watkins and Danny Ings, but ended up prioritising the signings of a new central midfielder and central defender.

Watkins – who joined the club for a reported £28m plus £5m in add-ons in 2020 – has attracted interest from Arsenal in the past.

A move to the Emirates is unlikely following the arrival of Gabriel Jesus from Manchester City and the contract extension handed to Eddie Nketiah.

West Ham have also been linked, but like Arsenal, have spent big money on a new striker already this summer.