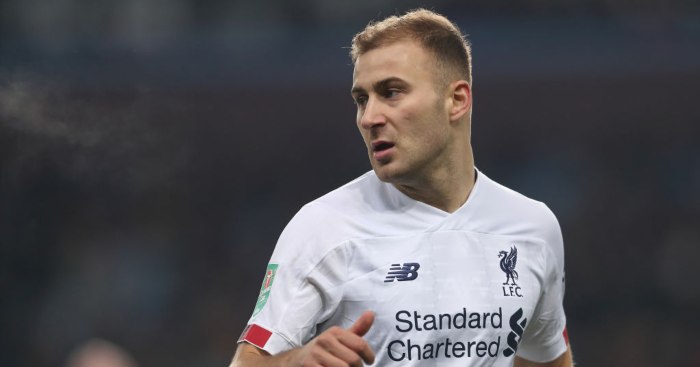 Liverpool youngster Herbie Kane has reportedly emerged as a target for Rangers in the January transfer window.

The 21-year-old, who is currently part of Liverpool‘s Under-23 squad, has broken into the first team this season having made two appearances in the EFL Cup.

The Englishman appeared for eight minutes against MK Dons in the third round, before playing the full 90 minutes on Tuesday as Liverpool’s youngest-ever team lost 5-0 away to Aston Villa.

Previous reports have suggested that the Reds have penned in talks with several clubs as they look to offload the likes of Kane, Rhian Brewster and Curtis Jones.

According to Football Insider, Kane was the subject of interest from Rangers in the summer, although Steven Gerrard’s side failed to secure a deal for the midfielder.

The source says that the Gers are ready to reignite their interest in the player in the winter window, with Gerrard keen to land a deal this time round.

However, in order for the move to be made, it is claimed that Rangers will need to cut loose some of their current midfielders, with Andy King and Greg Docherty named as two who could be axed.

Kane arrived back at Merseyside this term having impressed on loan at Doncaster Rovers last term, where he was named in the League One team of the season.

Should a deal be done, it would not be the first time Rangers have conducted business with Liverpool.

The Reds have previously allowed Ryan Kent, Sheyi Ojo and Ovie Ejaria to move north of the border in temporary deals, with Kent eventually signing a long-term contract at Ibrox in the summer.

In other news, Liverpool have confirmed the signing of midfielder Takumi Minamino from RB Salzburg, with the player expected to join up with his new teammates on January 1.

The move follows days of speculation and reports claiming that the Reds were in advanced negotiations to sign the Japanese international.

Speaking about his new opportunity, Minamino said: “It has been a dream, my dream to become a Liverpool player and I’m so excited that the moment has come true.

“To play in the Premier League was one of my targets. I think this is the top-class league in the world.