Home Mediawatch Why Gerrard and Klopp should prompt Lampard patience 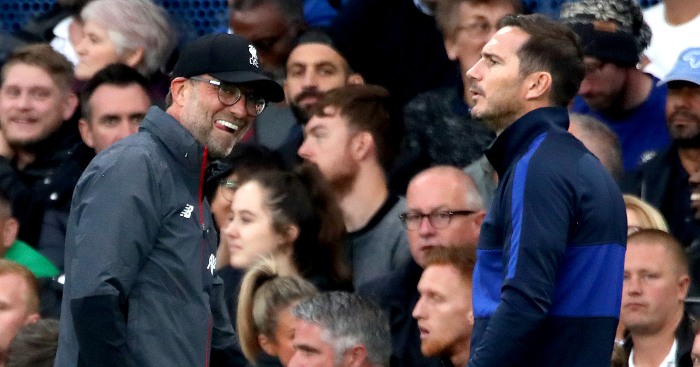 Sentence of the day
‘Lampard is halfway through his three-year contract and insists erratic results are a natural part of his team-building process after spending more than £220million last year on six new players’ – Andy Dillon, The Sun.

If we did not know already that Dillon is a Hammer…

Safety in numbers
Elsewhere in The Sun, Dave Kidd tries to argue that sacking Frank Lampard would not be in Roman Abramovich’s nature, actually. He is misunderstood.

‘If you judge him by Abramovich’s unique standards, then surely Lampard is on borrowed time?

‘Yet the history of Abramovich’s reign is not as simple as that.

‘Only once in the last eight years has he switched managers in mid-season — and that was Jose Mourinho in December 2015, during that campaign of Eva Carneiro and ‘palpable discord’ and Chelsea in an actual relegation battle.’

You might think ‘eight years’ is an odd timeframe to pick, but then you realise that ‘nine years’ would pull in two more managers who were sacked mid-season – Andre Villas-Boas and Roberto Di Matteo – and sacking managers mid-season suddenly feels like the rule rather than the exception. Three of the last five permanent managers have gone that way.

It’s also worth pointing out amid this re-writing of history to make Abramovich look patient and reasonable, that Kidd himself advised Lampard to turn down the job in the summer of 2019:

‘If Lampard is made an offer, it is difficult to imagine him turning Chelsea down, or even trying to play hardball with the man who leant him his big boat.

‘But he should. Unless Abramovich is determined to show uncharacteristic long-term planning and patience when appointing Lampard, then the idea would be doomed to failure.

‘This is a club which is only too happy to part ways with Sarri, despite the Europa League trophy and a return to the Champions League.

‘Patience is no virtue for Abramovich.’

From Paris with love
Why would Chelsea fans want to keep Frank Lampard though? After all, Thomas Tuchel would obviously bring Mauro Icardi and Kylian Mbappe with him to Stamford Bridge.

Because the biggest young star in world football would absolutely be keen to play for the ninth best team in England. Just try and stop him.

Especially when he learns that Tuchel will still be playing Timo Werner wide left.

Dear Stan
Stan Collymore has obviously not been studying the last eight years of the Abramovich reign because he seems to think that the Russian has a habit of hiring and firing managers.

So what does that mean for a man named ‘the brightest English coach to emerge for a generation’ by Collymore in July?

‘The big question the Russian must ask himself this time, though, is whether he does again what he has always done.

‘Thus pandering to those supporters who have been fed a diet of hire and fire, and who think Frank Lampard must go because he isn’t getting the best out of his men despite lavishing £200million on the squad in the summer.

‘Or does he turn his back on almost two decades of football business practice and say, ‘You know what, this guy is special and if I look at the anecdotal evidence of other young managers – Steven Gerrard, Dean Smith – if I give him time I know I will get something better at the end’?’

We’re pretty sure that Abramovich will never say ‘‘You know what, this guy is special and if I look at the anecdotal evidence of other young managers — Steven Gerrard, Dean Smith — if I give him time I know I will get something better at the end’?”. Because that would be really weird.

Gerrard entered management at the same time as Lampard and has led Rangers to the runners-up position in the Scottish Premiership twice; his unbeaten team is now 19 points clear of Celtic. There is plenty to suggest that Gerrard is ‘special’ (just look at the table) but no evidence as yet to suggest that Lampard is ‘special’. So why should Lampard be afforded patience on the grounds that Gerrard has shown excellence over exactly the same period?

As for Dean Smith; he is two months off his 50th birthday. So presumably the ‘anecdotal evidence of other young managers’ stems from his first spell in charge of Walsall, when he took them from the relegation zone to mid-table in the same time-frame as Lampard has been a manager and taken Chelsea to ninth. We’re really not sure that Abramovich will have studied Smith’s spell at Walsall.

‘I really hope Abramovich looks around the Premier League and sees that England’s two most successful clubs in the past few seasons haven’t arrived at their success by chopping and changing managers.

‘Jurgen Klopp has achieved great things at Liverpool but it took him much longer than the year-and-a-bit Lampard has had at Chelsea.’

Indeed. But Klopp had already won the Bundesliga twice with Borussia Dortmund; there was plenty of evidence to suggest that he was an excellent manager. And in his first year-and-a-bit with Liverpool, he spent less than £80m and took Liverpool back into the Champions League by the end of his first full season.

‘While Pep Guardiola was hired by Manchester City to build a dynasty and wasn’t fired in or at the end of those two seasons in which he failed to win the Premier League.’

He literally won the Premier League title in his second season with a record-breaking 100 points – his seventh domestic title. Comparing City faith in Guardiola with Chelsea faith in Lampard is an utter nonsense.

‘At Manchester United, the owners and board have supported Ole Gunnar Solskjaer through some tough times, while Mourinho will have at least three or four years at Tottenham if he keeps his nose clean.’

At last, a sensible comparison, though Solskjaer has never spent over £200m in one summer and ended up with a worse side. As for Mourinho, again, his magnificent haul of trophies do earn him a little more patience than Lampard’s play-off final defeat with Derby.

‘Arsenal have resisted sacking Mikel Arteta despite some calls for him to go in recent weeks and, barring City, who are arguably Chelsea’s equal, the rest are all bigger club’s than the Russian’s.’

Terrible apostrophe aside, Arteta is an interesting case but he took over a really poor Arsenal side, won a trophy (beating Lampard’s Chelsea in the final) and absolutely did not spend over £200m in the summer.

‘So I hope Abramovich keeps his eye on the prize and gives Lampard time to make mistakes, gain experience and grow into the manager I know he will become.

‘Because I guarantee that if he does then in two or three years, Lampard will build a team capable of winning the title.’

That is one hell of a guarantee, especially considering Lampard is statistically one of the worst managers of Abramovich’s tenure.

‘And if he does decide to sack him then, it doesn’t matter who is at the helm, Chelsea aren’t winning the title this season or next, whoever is in charge.

‘All Abramovich will have done is give Lampard the impetus to go to another top-four team in the Premier League or one of Europe’s other big leagues and be very successful winning the trophies he could so easily have been winning with Chelsea.’

We’re gone. That’s killed us. There is literally zero chance of ‘another top-four team’ appointing Frank Lampard as manager on the back of his first 18 months in charge of Chelsea. Literally zero.

United we stand
How The Sun website sell Southampton’s win over Liverpool:

Yep. That’s the first thing we thought too.

Recommended reading of the day
Jonathan Liew on Frank Lampard