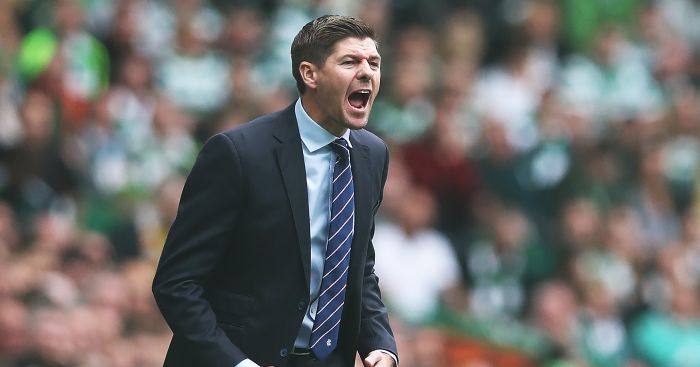 The Ibrox boss was looking for a response from his team after their Old Firm defeat earlier this month.

But he was still not pleased despite seeing Lassana Coulibaly, Ryan Kent, James Tavernier and Glenn Middleton put basement boys Dundee – who had Kenny Miller sent off on his Govan return late on – to the sword.

Alfredo Morelos had an early strike ruled out for offside despite appearing to be behind Daniel Candeias when the winger crossed, while the Colombian, Kyle Lafferty and Connor Goldson also passed up golden chances as Neil McCann’s strugglers were opened up time after time.

But Gerrard has warned his players they need to sharpen up in the final third if they are to go to the next level.

“We got an important win, four goals and a clean sheet,” said the Ibrox boss. “But it wasn’t a great performance. It was good enough but we will play better than that.

“We have to play with more control. I want as many goals as we can get. I want to create a team that is ruthless and relentless and we weren’t today.

“We deserve more goals. I don’t just want to get a 3-0 lead and take the foot off the gas. If we want to be a successful team, we have to be at it all the time.

“I apologise if I’m not giving my players enough credit. I just us want to be consistent and strong. I just thought first half I was watching a game of basketball. That’s not how I want it.”