Home All The News Gerrard: Players will ‘jump’ at chance to sign for Klopp 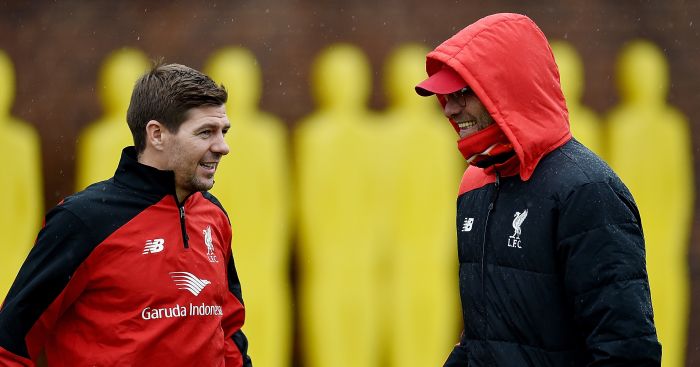 Former Liverpool captain Steven Gerrard believes this summer top players will jump at the chance to work with Jurgen Klopp.

The Reds boss has guided the club back into the Champions League for only the second time in the last eight seasons, providing they get through a play-off in August, but Gerrard thinks that will not be the deciding factor when it comes to transfer negotiations.

“If I’m a top player around Europe and Jurgen picks the phone up and I get offered the chance to play for this club, which is moving forward in every single department and has a world-class manager leading it, I’d be jumping at that opportunity,” the midfielder, who played for Klopp in a post-season friendly in Australia against A League champions Sydney FC, told the Liverpool Echo.

“I want to play for him and I am 37 next week! For me, it’s such an exciting project. Not just because we qualified for the Champions League but the whole project.

“I went out there to play in a friendly and I felt like it was the World Cup final. That’s what he gives players.”

Gerrard, who will take up his first full-time coaching role in charge of Liverpool’s Under-18s next season, added: “It’s his aura and the way he is with you – how he makes you feel.

“There’s no doubt about it, if he had been here three or four years I believe I would have been part of him delivering big trophies for this club.

“The next three, four, five, six years, whatever it turns out to be, are going to be very exciting and players will want to be a part of what Jurgen is doing.”