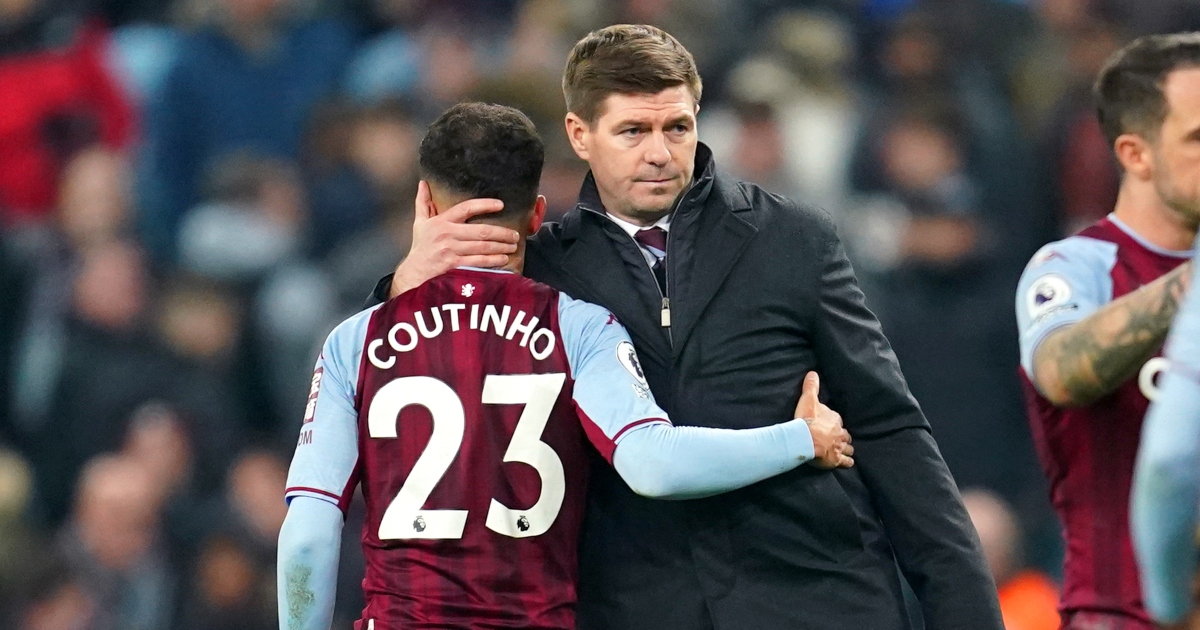 Steven Gerrard has praised new signing Philippe Coutinho after he made an huge impact on his debut as Aston Villa fought back to draw 2-2 with Manchester United.

United took an early lead thanks to a howler from Villa keeper Emi Martinez as he let in Bruno Fernandes’ strike. The Portuguese midfielder then added a second shortly after half-time.

However, a strike from youngster Jacob Ramsey before new signing Philippe Coutinho slotted home to give Villa a valuable point.

Speaking to the BBC after the game, Gerrard said: “We were very positive in all the preparation work we did. We should have taken confidence from Monday [FA Cup defeat at Old Trafford] but we didn’t start the game in the right place and were second best for 25 minutes.

“The first goal was coming because we didn’t look right in that time. We improved slightly but certainly deserved to be trailing at the break. I had to tell a few home truths and the reaction was fantastic.

“We conceded against the run of play but didn’t feel sorry for ourselves, we continued to show character and believe. I’ve got no problem with people making mistakes because they are making mistakes trying to do the right things, but what I can’t accept is the first 25 minutes and how we played.”

On Coutinho, Gerrard added: “It is a good start. We’ve brought a quality footballer to the club. We need to get him up to speed in terms of his match sharpness.”

Coutinho spoke to Sky Sports after the game, admitting he had missed the Premier League

“I missed these games and the Premier League. I’m very happy to be here with my new teammates. It was a good start, we kept believing until the end, but we didn’t lose.”

The Brazilian also admitted he has felt nervous before his making his debut.

“Yes, a little bit, I don’t speak English very well, I prefer to be on the pitch than talking all the time. I’m happy, it was the first game and I want to work hard to improve and be in better shape.”

“There have been many ups and downs. It is in the past, I’m here and I’m focussed on the objectives of the club and the manager and I want to a good job to help my teammates and the club.”

Villa’s other goal-scorer Ramsey revealed his delight at scoring his first goal at Villa Park.

“I think I’ve scored three goals in the Prem, and both of them were away. I said to myself the next one had to be at home. I had the one disallowed against Leicester but I’m happy to get my first Villa Park goal.

“Holte End singing your name: coming through the academy, that is what dreams are made of.”