Home All The News Gerrard: Six years on, I still think about that slip 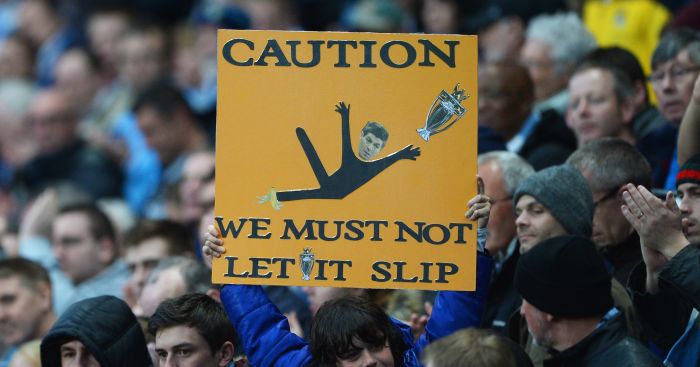 Liverpool legend Steven Gerrard has admitted that he still thinks about that infamous slip against Chelsea in 2014.

In the 2013/14 season, Liverpool were front runners for the Premier League title. With three games to go, they were five points clear at the top. Man City were third and six points off Liverpool, though they did have a game in hand.

Brendan Rodgers’ side faced 2nd placed Chelsea next, who were managed by Jose Mourinho. The Blues were gifted the lead as Gerrard slipped while in possession to free Demba Ba in on goal.

Ba netted before Willian sealed the game late on despite Chelsea only having 27% possession. Gerrard’s slip and the eventual defeat brought City right back into the title race.

Manuel Pellegrini made the most of this opportunity, winning all of their remaining games to finish the season two points ahead of Liverpool to win the league title.

Gerrard was recently interviewed on The High Performance Podcast, and he said that the incident comes into his mind “all the time”:

“What triggers it? I don’t know. TV. Images. Just me reflecting. I am someone who thinks a lot. I always try to tap into experiences.

“This is not a thing that happens every single day, but it was such a big moment.

“I’ve had lots and lots of moments, some incredible moments, which I never dreamed of.

“But your career takes you to some lows as well. It would be easy if you lifted the carpet, pushed them under and you never thought about them again. But I don’t think that’s ever going to be the case.

“I felt like part of me healed more, than any of those feelings.

“I know not only did it hurt me [in 2014], it hurt a lot of people who had followed this club for many, many years.

“Liverpool fans commit themselves to that club. They love the club, it’s in the heart. I’ve lived with it for 20 years and more.

“I knew what that meant, that Premier League [title], to an awful lot of people. My own family, to me. I mean, the way the club were with me, during that time, which will remain private.”

The Rangers manager watched on as Jurgen Klopp’s current side ended their 30-year wait to lift the Premier League title last season.

Gerrard insisted that watching them lift the trophy did not make him jealous.

He added: “During that run-in, to win the Premier League, it was special how that club were with me,’ he added.

“You’ve still got the relationships with all those people and stuff. I think a lot of people were probably wondering whether I was jealous, but no.”