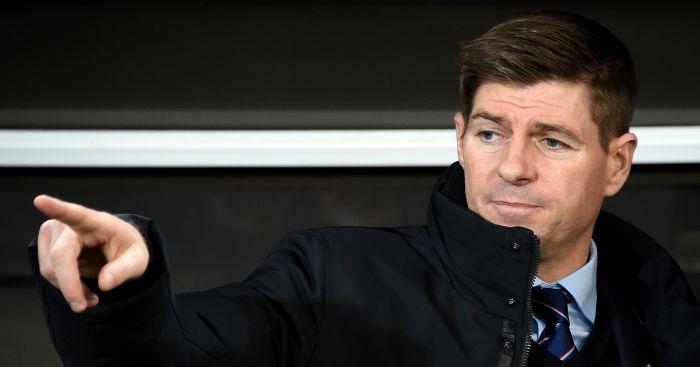 Rangers moved back to the top of the table but Steven Gerrard admits they have got “lots to learn” before they can be considered genuine title contenders.

While Daniel Candeias’ early strike was enough to seal the points which see Gers climb ahead of Kilmarnock on goal difference, Gerrard was again frustrated as his side showed “zero killer instinct” while wasting a host of chances to put Accies to bed.

And the Ibrox boss insists he is not getting carried away with his team’s league position.

His players celebrated wildly after beating Hearts at Tynecastle two weeks ago to move ahead of the pack but then spilled five points as they stumbled against Aberdeen and Dundee, leaving Gerrard to say: “I’m happy with the win and the clean sheet but we’ve got a lot to learn in terms of the performance.

“We put 22 corners in today and over 30 crosses. We created enough opportunities and got into some really exciting areas of the pitch. But we had zero killer instinct today. That’s a concern.

“I’m not really interested – with all due respect – in being top of the league right now. We were top before, then went and lost and drew our next two games.

“So what’s more important to me now is what we can learn from the performance. It’s blatantly obvious we have to learn to kill teams off in the final third.”

Candeias’s third minute strike was Gers’ first goal from open play in six games but Gerrard was left looking to the heavens as they saw a series of chances go abegging, including Kyle Lafferty’s incredible point-blank range miss just 90 seconds in.

“It was frustrating because we have to put teams like Hamilton away,” said Gerrard. “A lot of our game was good today. Out of possession we were really good. Going forward, we were wave after wave.

“But when we got to the final part of the pitch, we lacked that bit of magic – that final pass, that incredible cross. We lacked that player who is going to step up and kill the game off.