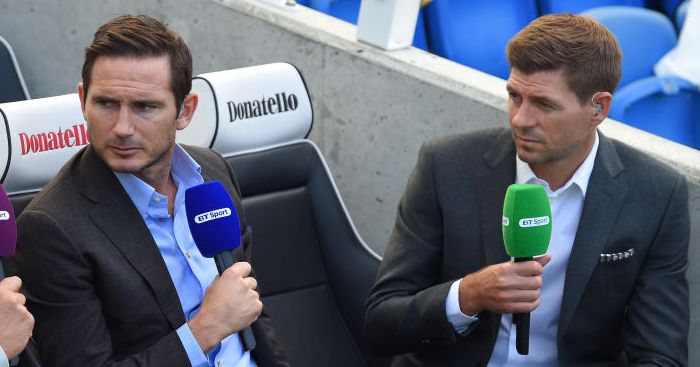 Steven Gerrard has turned down ‘an approach’ from Derby over potentially replacing Frank Lampard as manager.

Lampard is likely to leave Derby this summer to take the manager’s job at Chelsea if offered, having informed the Rams of his desire to leave.

He is the odds-on favourite to fill the role vacated by Maurizio Sarri, with Derby now preparing ‘contingency plans’ to replace him.

The Times say Derby approached Gerrard ‘to speak to them’ about the position, but the former Liverpool midfielder is committed to his work at Rangers.

The 39-year-old has three years remaining on his contract at Ibrox and ‘is busy planning for next season’, having already made four signings.

He ‘is targeting a genuine title challenge next season’ – presumably on the proviso that Celtic don’t sign Demba Ba – and believes ‘his long-term aspiration’ to manage in the Premier League is better served by impressing in Scotland’s top-flight rather than the Championship.

Derby ‘are resigned to losing Lampard’, with this the latest setback in their attempts to plan for life without him. Lee Bowyer has seemingly turned them down, and fellow target John Terry is unlikely to make the jump.