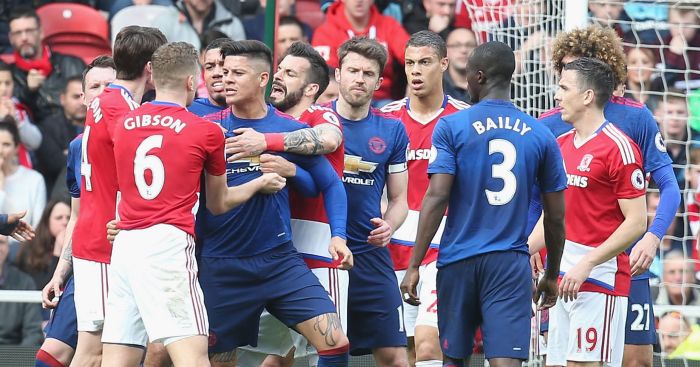 Rudy Gestede insists there was no bite from him or Eric Bailly during a clash between the pair towards the end of Manchester United’s edgy win at Middlesbrough.

Marouane Fellaini’s header and a superb Jesse Lingard strike gave United a two-goal cushion that Boro substitute Gestede halved in the 77th-minute at the Riverside Stadium.

Between Gestede’s strike and Antonio Valencia’s late goal wrapping up a 3-1 win for the visitors were some unseemly scenes as players clashed following a coming together between Boro’s goalscorer and United defender Bailly.

Ben Gibson thought team-mate Gestede had been bitten, but the striker has denied any talk of there being a bite from either of them.

“We had a few words together, it was nothing major,” the Middlesbrough striker said. “He gave me a hug and a kiss, that’s it. I didn’t feel anything.

“Ben thought he bit me, so that’s why he reacted like he did. But I told him now we were just talking, there was no problem.”

Tempers frayed again in the tunnel at the end of the match – something neither United manager Jose Mourinho or caretaker Boro boss Steve Agnew shed any light on.

However, United defender Phil Jones suggests it was little more than an expression of frustration from the hosts, who remain stuck in the bottom two of the Premier League following the loss.

“I think it was a bit of frustration creeping in on their behalf,” he said.

“It is a difficult situation, I was in it with Blackburn so I know how they feel.

“When emotions are high these things happen but it was something and nothing.”