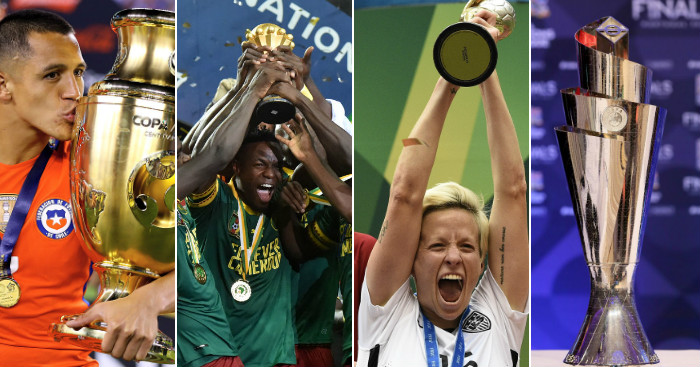 It’s about this time of year, every other year, that we start to get a bit panicky. The number of games left for most Premier League sides is now in single digits. The first domestic trophy of the season has already been awarded. More and more teams will know they have nothing left to play for in the coming weeks, and the days are getting just long enough that we start to think of play-off finals and end-of-season lists.

Normally, the summer months in odd-numbered years represent an enormous lull in match action, forcing us to get our fix elsewhere. During these dark days, a desperate and increasingly feral Daniel Storey can be seen wandering the streets of Nottingham, desperately searching the charity shops for a working Tomy Super Cup Football game. Some poor souls even resort to watching rugby league.

The Champions League final falls on June 1 this year, with the showcase in Madrid serving as the final curtain on the domestic season across all but the northernmost parts of Europe; but this year there will barely be time to draw breath before we get into a blistering summer of football.

England men actually have a chance to win a trophy, for a start. It’s not really much of a trophy, truth be told, and should they lose to either the Netherlands on June 6 or to either Portugal or Switzerland in the final three days later, we will obviously all decide the Nations League is a worthless little tin pot. But should they claim victory, it will naturally be seen as a bold statement of Gareth Southgate’s major tournament ambitions for next year, much like Le Tournoi had been before the Three Lions’ triumphant run to World Cup glory in 19…ah, wait.

Never mind, though, because where England’s men failed in 1998 and 2016 – namely, France – the women can go one better in the World Cup this year. The Lionesses have just won their own equivalent of Le Tournoi, (which we are talking about a lot more than we expected to, but there we go), with Phil Neville’s side going undefeated against the USA, Japan and Brazil to claim the SheBelieves Cup.

England are currently fourth-favourites to turn that form into a World Cup win come July 7, which would not only be a huge achievement unto itself, but could represent an enormous boon for the women’s domestic game, which enjoyed a boost in popularity after England reached the 2015 semis.

July 7 is a big day all round, in fact: the women’s World Cup final, the Copa America final and the CONCACAF Gold Cup final all take place that day, having all started in mid-June; so if watching people hoist trophies above their heads is your thing and you fancy staying up late to watch all three, you’ll be in absolute heaven.

Six days later, you get another major continental final as the month-long Africa Cup of Nations culminates in the summer for the first time.

Add to that the men’s and women’s U17 Euros in May, the men’s U20 World Cup from May to June, the men’s U21 Euros across the second half of June, and both genders’ U19s Euros in late July – the women’s version of which takes place in Scotland – and you’ve effectively filled your calendar up to the start of the new 2019/20 season.

We may never need go hungry for football again, and for that we are truly thankful.