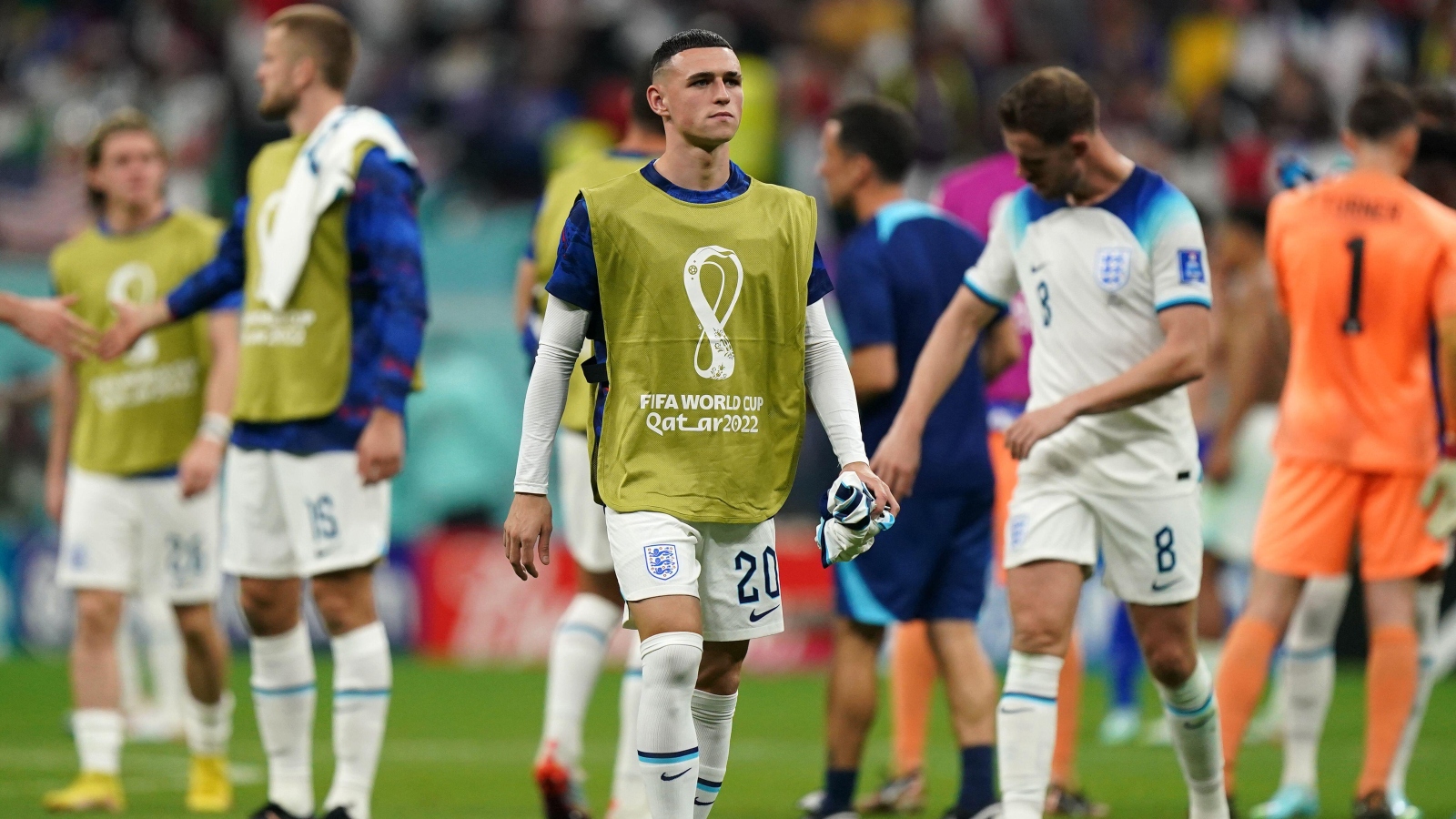 Jamie Carragher asked the same question as many people on Friday evening: why did Phil Foden not come on for England against the United States?

England struggled to pose any serious threat to Matt Turner in the USA goal as the Three Lions drew their second World Cup game 0-0.

It was a hugely disappointing performance which reminded many of England’s goalless draw against Scotland at the European Championships last year.

Gareth Southgate’s side then went on to top their group and reach the final of the competition, so no need to panic, folks.

While England lacked creativity and looked tired and uninspired against the USA, Southgate opted against introducing Foden.

He instead turned to Jordan Henderson, Jack Grealish, and Marcus Rashford, who all did sweet f*** all after coming on.

Gary Neville said the decision to not start Foden and then leave him on the bench was “interesting”, but held back in his overall criticism of Southgate, whom he has great “respect” for.

And Neville’s best mate Jamie Carragher has aired his thoughts and asked, ‘Where the hell was Phil Foden’ on Friday evening.

Writing for The Telegraph, ex-Liverpool and England defender Carragher said:

“As England toiled to create a chance against a well-organised USA team, you could almost hear a nation shouting at the TV: “Get Phil Foden on’.

“I was among those hoping Gareth Southgate would turn to the Manchester City youngster. It was baffling that he remained on the bench when the game was crying out for his creativity.

“If you had told me before the tournament that Foden would only feature for 19 minutes of the first two World Cup games, my initial thought would be he must be injured.

“When asked to select my starting XI for the opening fixture against Iran, Foden was in it. The more the squad was studied, the harder it was to leave him out. He is too much of a special talent.

“Speak to any football supporter watching the Premier League over the last three years and ask ‘who is the most naturally gifted English footballer today?’ and 80 per cent would say Foden. The other 20 per cent are not watching closely enough.

“For Southgate to turn to his substitutes and opt for his City team-mate Jack Grealish ahead of him felt strange. Would Pep Guardiola look to Grealish before Foden if seeking a winning goal? Highly unlikely.

“To be fair to Southgate, it must be acknowledged Foden has not yet produced his Manchester City form in an England shirt. The broader question must be why, and how can that be fixed sooner rather than later. Preferably in this tournament. He belongs on this stage.

“Foden has had plenty of opportunities for England, so it is not as if Southgate has ignored him. But although it is very early in his career, there have been times watching Foden playing for his country when his situation has reminded me of John Barnes in his heyday.

“For those too young to remember, between 1987-91, Barnes was not only the most talented England player of his generation, he was streets ahead of the rest. Think of Thierry Henry during his peak years at Arsenal. That is how good Barnes was for Liverpool.

“Yet for England, he was a shadow of himself.”

Foden has scored eight goals in 20 matches for Manchester City this season and is a favourite of Pep Guardiola – who recently penned a new contract.

Southgate started Bukayo Saka in Foden’s preferred right-wing position in both of England’s World Cup games so far, with the 21-year-old winger starring for Premier League leaders Arsenal this season.

And Carragher is worried that the City playmaker’s ability is not being utilised by the Three Lions manager.

“The question was often asked whether the problem was Barnes or England,” he continued. “Surely it cannot be so difficult to accommodate a rare talent?

“It is imperative history does not repeat itself with Foden. Already, it is a shame he is not one of the first picks in the starting line-up, let alone the first go-to player from the bench.

“When Foden played in the last Euros you would have thought it certain he would be established in the side by now. Instead, others have jumped ahead of him.

“I really like Bukayo Saka and have no criticism about his selection given his Arsenal form. I also understand the loyalty to Raheem Sterling who has been one of the best players in the Southgate era.

“Over the last few days we have been rightly talking about Jude Bellingham a lot.

“But can it just be shrugged aside what Foden has been doing in the Premier League? To me, he eclipses those chosen ahead of him. I truly believe if he was Spanish he would be in their first XI.

“Luis Enrique’s use of his outstanding youngsters, Pedri and Gavi, is proof of that. Perhaps that is through necessity, but Enrique looks like he is building his team around the teenagers.

“There were a lot of disappointments against the USA. The lack of energy in the side compared to the first game was a worry, as was the general lack of goal threat and how we were unable to find solutions to the USA approach.

“It was obvious how they would play – full credit to them for a perfectly executed game plan – but we did not seem as prepared to counter them as expected.”

Carragher went on to say that utilising the bench will be crucial in the World Cup, due to the hectic schedule prior to the tournament, and the scorching heat in Qatar.

With the draw against the USA, Southgate does not have the luxury of resting his key players in his side’s final group game.

Carragher believes this is a “big setback” and added: “He (Southgate) can be sure the clamour for Foden will only get louder after Friday’s performance.”

MAILBOX: Would an England World Cup win in Qatar be in spite of Gareth Southgate?