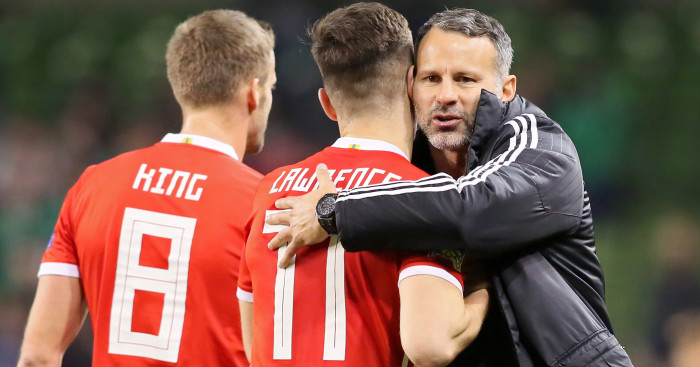 Ryan Giggs was full of praise for his Wales side after they beat Republic of Ireland 1-0 in the UEFA Nations League.

Harry Wilson scored a free kick in the second half to give Wales the victory, which puts them top of their Nations League group with one game left to play.

Giggs, speaking to Sky Sports, revealed his delight at the hard work shown by his side throughout the game, and revealed how Wilson – who also scored from a free kick for Derby County against Giggs’ former club Manchester United last month – has been able to achieve success from set pieces.

“I’m so proud, they dug in right to the end. It was a really brilliant second half performance,” he said.

“The determination pleased me, to not give a goal away. I said on Thursday that we didn’t do the basics against Spain but we did today.

“We were led by the captain. Ashley Williams was outstanding for 90 minutes. He defended, did the hard stuff which gave us the platform to go on.

“We set out to win the group, it’s a tough group and now it is in our hands.”

If Wales avoid defeat to second-placed Denmark next month, they will be promoted to League A.